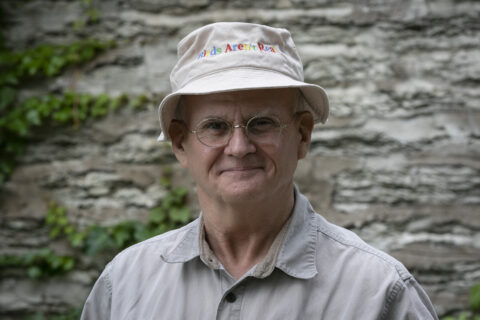 “General Manke bushwhacked me; I had no idea it was going to happen,” said Rocheford. “I thought it was a business lunch. Instead, General Manke looked over at General Best and nodded. She stood up and said, ‘attention to orders.’”

Lavender Media is one of the largest LGBTQ+ publications in the United States. The organization has publishes 26 magazines a month, Lavender Magazine, since June 10th, 1995.

“It isn’t about me, it isn’t about me at all,” said Rocheford, also a veteran who commissioned in 1975 and served until 1987, ending his career as a major in the Army Reserves. “It’s about you. You’re wearing the uniform and the people I write about, it’s about them.”

According to Rocheford, the partnership between Lavender Magazine and the Minnesota National Guard is the first time that he knows of in history that the military reached out to lesbian, gay, bisexual, trans, and queer recruits.

The partnership began in 2017 when Stephen met with retired Maj. Gen. Neal Loidolt, former commanding general of the Minnesota National Guard’s 34th Red Bull Infantry Division. At the time, Loidolt was the president of the Minnesota Assistance Council for Veterans, known as MAC-V. Loidolt attended one of Lavender’s ‘1st Thursdays’ events. The monthly event offers a space for community members to socialize with others.

“I gave his organization a booth at my event,” said Rocheford. “Six hundred people were there, and they swamped the booth. General Loidolt thanked me for letting them have this booth and I said, ‘let me take you to lunch next week’.”

Following their lunch, Rocheford got a call from Minnesota’s then Adjutant General, Maj. Gen. Jon Jensen. Jensen has since been promoted to lieutenant general, serving in Washington, D.C. as the Director of the Army National Guard.

“I may be the guy that came up with the idea,” said Rocheford. “But Lt. Gen. Jon Jensen started it.”

Rocheford believes that this partnership is helpful to the Minnesota National Guard, the Nation, and the gay community. Reflecting on his career, he compares this shift towards acceptance of LGBTQ+ members of the military to when women were allowed to serve after WWII.

“One time, a new woman was there, and her boss was a sergeant major,” he said, relaying a story from his past. Rocheford explained that the sergeant major had worked there for a long time and had served in both the Korean War and WWII.

“He was yelling at her about something, and suddenly, she just broke down in tears and started crying,” said Rocheford. “He turned purple, threw his arms in the air, and stormed off. The transition from that historical observation to today’s Army shows a 180-degree difference. There’s been a transformation for equal treatment of minorities. The last hurdle for the Army is the Gay community.”

Throughout the longstanding partnership, Lavender Media has featured many Airmen and Soldiers of the Minnesota National Guard who also belong to the LGBTQ+ community.

“I help the National Guard by humanizing the military to the average person in the community,” said Rocheford. “The Guard is ‘the butcher, the baker, and the candlestick maker’; they are our neighbors. They are the ones that take care of things when there’s a tornado or a flood or a bridge collapse. When they are activated for federal service, they serve the country and then they come home.”