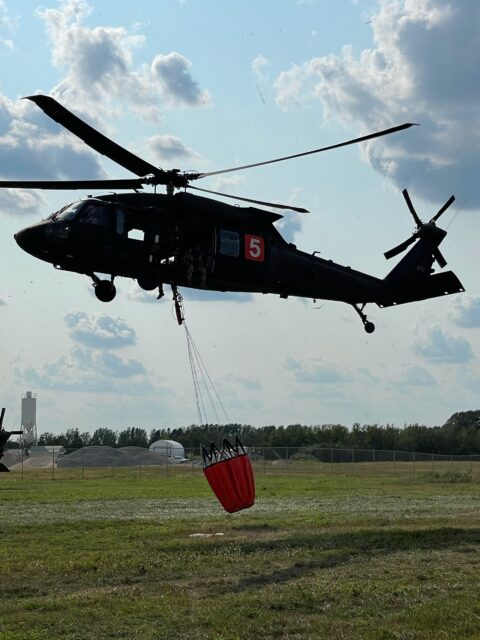 September 24, 2021 (ST. PAUL, Minnesota) — As wildfires raged in Washington and northern Minnesota in August, two units from the Minnesota National were called into action.

Army Maj. Brandon Ortmann, the aviation duty officer for the missions, provided coordination between the Minnesota National Guard Joint Operations Center and the Department of Natural Resources as well as the aircrews, units, and facilities.

Ortmann worked to ensure crews were identified to support each request and then worked with the battalions and Minnesota National Guard JOC to deploy personnel.  He also coordinated with the aviation liaison officers at each site to facilitate any personnel or equipment swaps to prevent a break in capabilities provided to the DNR.

“As the crew responded out west, the Minnesota Department of Natural Resources requested our support in response to the Norris fire near Warroad with two UH-60M Black Hawk helicopters and support personnel, to include refueling capabilities,” said Ortmann  “Once the Norris fire was under control, the crew was sent to the Greenwood fire and based out of Two Harbors. These two crews and support personnel returned to St. Paul after two weeks of support.”

Battling fires on two fronts is not easy, said Ortmann.

“One significant challenge we faced out in Washington was our ability to provide water bucket support in a high-altitude, high-temperature environment while using a fulling outfitted MEDEVAC aircraft,” he said. “Due to this limitation, the MEDEVAC crews focused on providing daily MEDEVAC coverage.

Despite the challenges, Ortmann was pleased with how the units responded.

“Each team provided outstanding support to the customer,” he said. “Our Washington crews never dropped coverage and were ready to support within 24 hours of arrival.  While prepared to launch at any moment, they provided training to local agencies and the Washington National Guard’s State Partnership Program, Thailand”

He was not alone in that assessment. C Company, 2-211 General Support Aviation Battalion’s performance in Washington led to accolades from Washington National Guard’s Adjutant General.

In Northern Minnesota alone, the 2-147th Assault Helicopter Battalion dropped more than 375 water buckets on three separate fires throughout the area while relocating on two separate bases and maintaining nearly instantaneous support as needed, according to Ortmann.