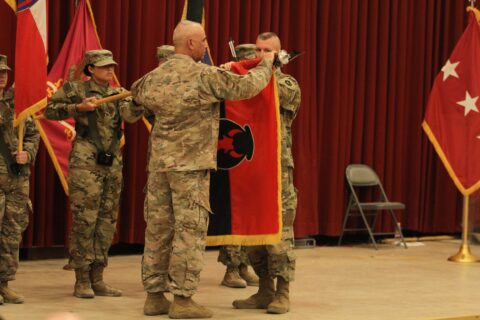 July 19, 2019 (KUWAIT) – More than 650 Citizen-Soldiers of the Minnesota National Guard’s 34th Red Bull Infantry Division have departed the Middle East as they return home after a ten-month deployment to the region.

Units supporting the task force regularly conducted multilateral, military-to-military exercises with partner nation forces in the region. Training exercises varied from testing command-post capabilities to side-by-side maneuvers, developing a mutual understanding of how to conduct operations in a multinational environment.

Through strong partnerships and with integrated military capabilities, the U.S. and its regional partners will be ready to act together quickly in times of crisis to ensure the continued security and sovereignty of our partner nations.
By July, the Red Bulls had left their mark in their area of responsibility, having commanded ten brigades during their ten months in-theater and overseen dozens of training missions with partner nations.

Red Bull Soldiers are making a brief stop at Fort Hood, Texas, to finish the demobilization process before returning home in the coming days.