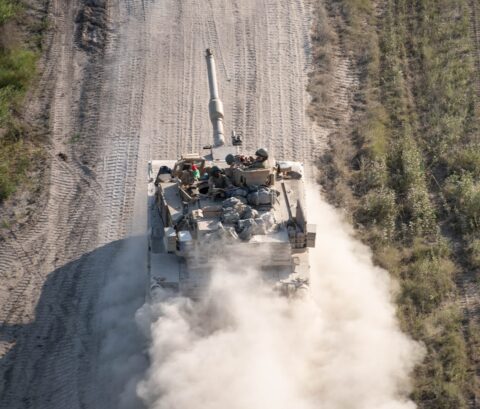 In July, the brigade conducted the largest Minnesota National Guard rail operation transporting 2,000 pieces of equipment more than 1,200 miles to Fort Hood from Camp Ripley Training Center in Minnesota. The brigade wanted to take full advantage of exercising its equipment in the rugged terrain offered at Fort Hood.

XCTC is a 21-day collective training event for brigade combat teams to achieve trained platoons or sustain company-level readiness.  The training simulates as closely as possible, the conditions and scenarios soldiers might encounter during combat. Integrated into the scenario, the soldiers face a variety of threats, including traditional military forces, insurgents and criminal actors.

XCTC is customized to meet the brigade commander’s training objectives, using Unified Land Operations scenarios and the Decisive Action Training Environment. Through this training scenario, the 1/34th ABCT is using their XCTC rotation as a rehearsal for the National Training Center.

“All the battalions in the brigade being here simultaneously has allowed us to exercise our entire sustainment enterprise,” said Kemp. “We are providing and transporting classes of supply and doing maintenance over the same breadth and scope of what the ABCT would be if we were to go to war.”

In addition to exercising its sustainment, the brigade is focused on training every platoon size or lower element in the formation, allowing some of the more specialized elements to fully exercise their capabilities.

“The XCTC itself has a huge benefit,” said Kemp. “But then also doing it here and allowing the entire brigade to be on the ground at the same time for 21 days has really taken us to a whole new level of proficiency at every level: platoon, company, battalion and headquarters.”

The brigade will travel to Fort Irwin, California, next year to complete a rotation at the National Training Center, a capstone event that will validate the brigade’s ability to command and control and maneuver as a brigade. In preparation for NTC, the brigade is trying to get as much value as it can from the XCTC experience.

“The initial guidance and vision for this was to be a complete rehearsal for NTC in any way that we could,” said Kemp. “Where we can achieve a complete replication, we’re going to do that here.”

The soldiers are putting in long hours, moving over difficult terrain and working through dangerous heat. The conditions, while tough, are also very similar to what they will face next year at NTC and what they could face during an overseas combat mission. It allows the soldiers to become familiar with the conditions and their leaders to focus on ways to accomplish the mission while taking care of their soldiers.

“Not only will they have grown their proficiency and ability to know their job, but they can have a sense of the confidence that they did it in the same conditions that they’ll have to do it next year,” said Kemp.

As the training continues, Kemp says he is proud of how the soldiers are thinking through problems and asking for the resources they need.

“We have a learning organization,” said Kemp. “Actual combat is a very complicated art and science balance that is incredibly difficult to do. It takes very smart men and women to do it. It takes them to want to learn and self-develop and then work together with their teams to develop – and they’re doing that.”