Minnesota Soldier Prepares for Deployment, Looks Back on Career 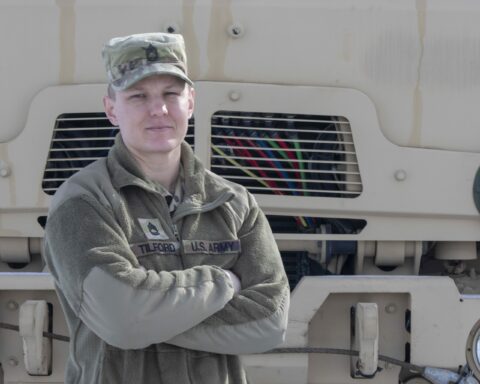 March 12, 2021 (CAMP RIPLEY, Minnesota) —Sgt. First Class Erin Tilford has served with the Minnesota National Guard for 12 years as a Chemical, Biological, Radiological, and Nuclear (CBRN) Specialist with the 434th Chemical Company based in Hastings, Minnesota.

Tilford, originally from Dover, Minnesota, is gearing up to deploy with her unit later this year. This will be her second deployment overseas and she is excited to deploy again while getting to know her soldiers and taking care of them.

“I enjoy being part of the team and the camaraderie,” said Tilford. “I’ve always liked getting to know everyone. My big thing is taking care of soldiers, making sure they know what they’re doing and that the missions get accomplished.”

As a young soldier, Tilford found other female leaders to look up to. When Sgt. Maj. Katie Blackwell became the first sergeant of the 434th Chemical Company in 2014, Tilford remembers the speech that she gave.

“It one hundred percent influenced me to continue on with my career,” said Tilford. “It influenced me to get promoted to sergeant and continue with the distance learning process and go to the Advanced Leader Course and then even to where I am standing today.”

Tilford has a deep love and inspiration for continuing to serve because of the strong female leaders who came before her. She keeps in contact with them and regularly checks in for advice and feedback as a leader.

Tilford also offered advice for those looking to follow in her footsteps.

Tilford and the rest of the 434th Chemical Company are completing necessary training at Camp Ripley prior to mobilizing later this year. As part of the training, her platoon is being evaluated on their ability to do site exploitations which involve collecting information and material from a designated location to analyze them. They are intended to be used to extract as much potential intelligence from a point of interest in hopes the data will lead to enemy targets.

During training, her soldiers received a mission from their Forward Operating Base (FOB), where the unit command is located, and convoyed to the specified location. Next, a team of soldiers with Self Contained Breathing Apparatuses (SCBA) and Level A suits assessed the area to ensure that it is safe so the rest of the platoon can set up a decontamination site.

Tilford enjoys when the unit drills at Camp Ripley because it forces them to live together. It also gives them an opportunity to learn more about each other and build up their teams.

“When we are at our home station, we don’t stay overnight,” said Tilford. “We aren’t getting the extra social time and it breaks down camaraderie. Here, we all come together and have a good time.”

Outside of the Minnesota National Guard, Tilford plays on a women’s tackle football team called Vixen based out of Minneapolis. She also works as a Corrections Officer for Minnesota’s Department of Corrections. Her military training and commitment to her soldiers has made Tilford a more well-rounded person.

“I am not sure where I’d be if I didn’t join the military,” said Tilford. “It pushed me into a more guided and structured path that has kept me a good person for the last 12 years.”

Lastly, Tilford strives to live her life by her favorite quote: “I refuse to allow any man-made differences to separate me from any other human beings.”