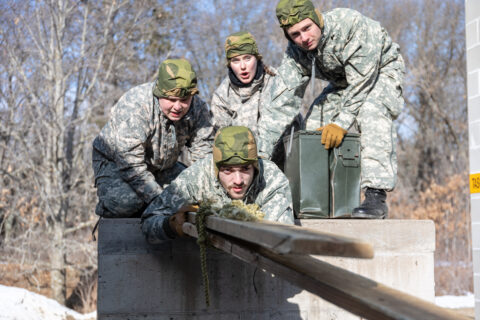 “Watching the youth come together in comradery and supporting their platoon members to the finish line is an experience I will never forget,” said Minnesota National Guard Army 2nd Lt. Ryan Seeger, the American platoon leader for the youth. “Moments like these remind us why we serve and inspire us to continue that service.”

The youth platoon participating in the exchange consists of Norwegians between the ages of 18 and 20 who are members of the Home Guard Youth organization, a military introduction program with the Norwegian Home Guard.

The program is a spare time activity for those who are interested in the military, outdoors, and challenging themselves before they become service members. The youth section of the Home Guard does not teach combat skills and is open to youth between the ages of 16 and 21.

Throughout the exchange, which began March 25, the youth have participated in an ongoing competition known as North Star Stakes.

Upon arrival, they were split into three squads: Red, White, and Blue. The squad members worked together for various challenges to acquire points. At the end of the exchange, the squad with the most points will be named the ‘Best Youth Squad.’

During the biathlon race, each member ran a 5-kilometer race with two bouts of shooting.

“The most challenging was standing and shooting,” said Aslak Sund, a member of the white squad. “We wanted to motivate everyone at the end; it’s about the platoon finish, not the squad. It’s about supporting each other and having fun.”

White squad took the winning honors at the conclusion of the race, however members from each squads carrying their guide-on flags, came together to support the very last finisher.

“From day one the youth have been incredibly motivated and professional,” said Seeger. “The biathlon event was no different. I am incredibly proud and honored to be part of NOREX. The Youth and Home Guard leadership continue to impress me. It is clear the future of the Norwegian Home Guard is in good hands.