Once in the Service, Always Ready to Serve 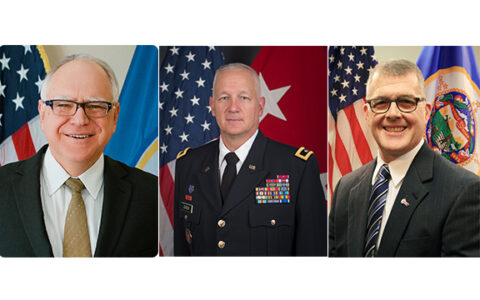 April 21, 2020 (ST. PAUL, Minnesota) — While the fight against COVID-19 requires each individual to do their part by social distancing and taking other precautionary measures, it also takes unwavering leadership when faced with difficult decisions. This is something that sets the state of Minnesota apart from the rest. Some of our most engaged decision-makers during this crisis share a unique common bond: service in the Minnesota National Guard.

The Chairman of the Joint Chiefs of Staff, Gen. Mark Milley, said of the COVID-19 pandemic, “We are at war. A different type of war, but a war nonetheless.” Who better to fight a war than those who have been trained to do so?

A whole-of-government response has been necessary to fight this pandemic. This means that state agencies must work together and synchronize their efforts; from the legislature to the Department of Health; Homeland Security and Emergency Management to the Minnesota National Guard.

Minnesota Governor Tim Walz served in the Army National Guard for 24 years, achieving the rank of command sergeant major during his tenure. He served overseas in support of Operation Enduring Freedom and was the highest-ranking enlisted National Guard Soldier in southern Minnesota when he retired from 1st Battalion, 125th Field Artillery in 2005.

“I couldn’t be more grateful for the skills that being a member of U.S. Army National Guard gave me,” said Walz. “In the Guard, you put your community first. Everything you do, you do to ensure the health, safety, and security of the people who are depending on you. And as Governor, those are principles of servant leadership that I rely on every day.”

Between March 13, when Walz issued his executive order declaring a state of peacetime emergency, and April 15, Minnesota’s residents maintained the lowest rate of COVID-19 infection in the country. In spite of this fact, Walz continues to caution citizens about being lulled into a false sense of security. Similar to being on the battlefield, the Minnesota citizenry is being relied upon to be constantly vigilant to this invisible enemy.

The director of Homeland Security and Emergency Management for Minnesota, Joe Kelly, also served in the U.S. Army and Minnesota National Guard for 31 years. He is a veteran of Operation Iraqi Freedom and served as the Assistant Adjutant General for the state of Minnesota. His educational background includes a master’s degree from the United States Army War College.

“The Army taught me to be a servant leader,” said Kelly. “The value of selfless service keeps me focused on getting those on the front lines the tools they need and eliminate the obstacles they encounter. In the end, it’s all about the people in the fight, supporting them, encouraging them and giving them the tools they need to be successful.”

This sentiment was echoed by the adjutant general of the Minnesota National Guard, Maj. Gen. Jon Jensen. “This will be a challenging time for those on the front lines of the pandemic. Much will be asked from our first responders, medical professionals and caregivers. Their resiliency, bravery and commitment to duty will serve as a beacon for us all, and our collective energy, passion, resources and support can help overcome their fatigue and ultimately save lives,” Jensen wrote in an op-ed piece published on April 1, in the Star Tribune.

The motto of the National Guard is, “Always Ready, Always There.” Most National Guard members spend the majority of their time as civilians; working in offices, hospitals, restaurants and businesses in the same communities they serve. When called upon by their government, be it the state or the nation, they are uniquely qualified to bring both a military mindset and civilian skillset to the cause they may be supporting.

Whether it is because of this common background, or simply a prevalence of calm, vigilance, and flexibility in times of confusion, the leaders of Minnesota are unwaveringly united in the vision of a healthy and resilient state.