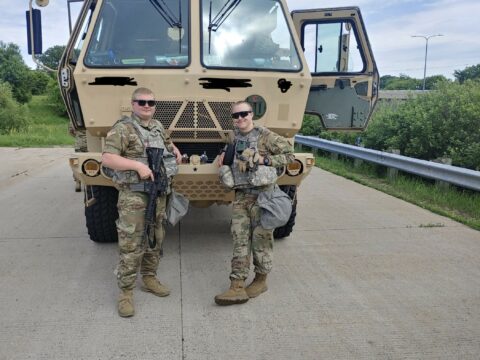 Bevis is currently on his first overseas deployment with Headquarters and Headquarters Company, 1st Combined Arms Battalion, 194th Armor Regiment as an emergency care sergeant. In addition to his platoon duties, he is also a unit prevention leader, equal opportunity leader, master fitness trainer and hazmat certifier. He also happens to be a transgender Soldier.

“I had always had an interest in joining the Army to some capacity ever since I was young,” Bevis said. “I knew that if I wouldn’t join the military that that would’ve been a huge regret later down the road.”

Bevis spent most of his childhood in Thailand where he was able to experience another culture, learn another language, and play soccer. After graduating high school in 2013, he moved back to Minnesota and played soccer for Bethel University.

“I was playing soccer for Bethel University and I had just started to connect with a lot of family that I had missed out on being with growing up, I felt like the Guard was the right fit for me,” Bevis said. “I also knew that I always wanted to be a medic and that if I couldn’t get that, that I wasn’t going to join.”

Bevis attended his first National Training Center Rotation with the 1st Armored Brigade Combat Team, 34th Infantry Division in 2016 as a line medic with the 334th Brigade Engineer Battalion. It was on June 30, 2016, that then-Secretary of Defense Ash Carter announced that transgender people could serve openly in the U.S. Armed Forces. Shortly after the rotation, he began his medical transition in September 2016.

“It was a very rough road for a while,” he said. “Honestly, a lot of that was because of how new it was to a lot of people – people didn’t really know how to respond to it – and most people just didn’t personally know anyone transgender before me.”

It took three years for Bevis’ gender marker to change from female to male in the military’s official database, the Defense Enrollment Eligibility Reporting System. During those three years, he was often forced to disclose himself as transgender, because he had to use the female latrines and barracks while he presented as male.

“It only took about six months for me to pass as male and for people to think I was lying when I would tell them I’m transgender,” he said. “It was always anxiety inducing to have to go to different courses and trainings with people outside of my unit who already knew, so I would always have to explain why I had to use the female bathroom and sleep in the female bays. I just approached every new group of people I had to be with pretty head on, I would always let them know right away and no one ever had any issues and would just tell me that they respected me for that and that it didn’t bother them, so I’m very grateful for that.”

During this process, Bevis continued to show up as the best Soldier he could be. In November 2018, he earned the title of Distinguished Honor Graduate from the Army’s Basic Leadership Course and was promoted to sergeant in December 2018. He continued participating in the Bataan Memorial March, a tradition of 1-194th AR. He also participated in the annual Norwegian Exchange in 2019.

As the Minnesota National Guard implemented the military’s new transgender policy, Bevis found support from his leadership along the way.

“When I got over to 1-194, I was very grateful to have leadership that really fought for me and really pushed hard to get my packet done, so the military would finally recognize me as male, since that had taken so painfully long,” Bevis said. “I’m also grateful for all the mentors I’ve had along the way that stood up for me and still continue to mentor me.”

Effective April 30, 2021, the Department of Defense implemented a policy similar to the 2016 policy after a more restrictive transgender policy was implemented in 2019.  September 20, 2021, will mark the 10-year anniversary of the repeal of Don’t Ask, Don’t Tell, a policy that did not allow for lesbian, gay, and bisexual service members to be open about their sexual orientation. It wasn’t until September 2013 that same-sex spouses were able to receive military benefits.

“We’re really not all that far removed from Don’t Ask, Don’t Tell, and we’re definitely not far removed at all from the ban on trans people serving,” Bevis said. “Having these policies be lifted is huge and is a huge force multiplier.”

Fellow service members make a difference in fostering a healthy climate that impacts Soldiers and Airmen who are open and not open about their sexual orientation.

“I hope that fellow service members see LGBT members as equals,” Bevis said. “I hope that fellow service members are mindful that there are a lot of LGBT people in the service that don’t feel safe being out and that you don’t always know what people have gone through or their full story. If I wouldn’t have had a community of people coming around me and supporting me after I came out, I don’t know where I would be.”