Prioritizing hearts: Respiratory Therapist Reflects on a Deployment of Firsts 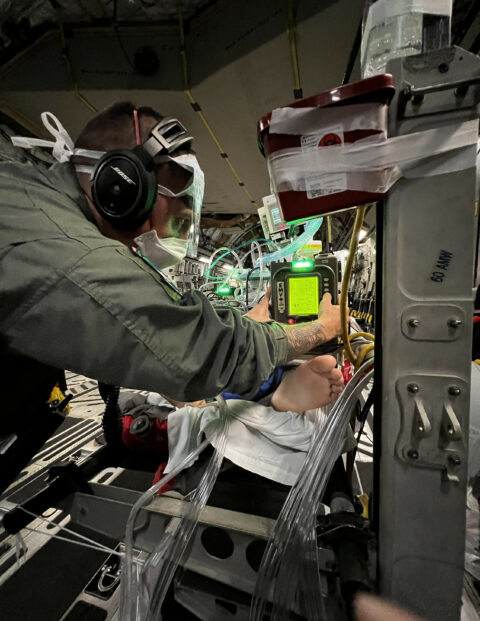 “[As] the respiratory care practitioner, I manage the ventilator breathing for the patient, as well as assist the nurse and doctor en route to the next level of care,” said Baker.

While he is no stranger to deployments, having deployed multiple times as an Airborne Mission Systems Specialist, this was his first deployment in a new career field to a different theater of operations. Baker sought support from his unit as he faced the uncertainty that comes with performing patient care for the first time in a real-world setting.

Besides these challenges, which he quickly overcame, the hardest part of this deployment was the distance between him and his fiancé. This was Baker’s first deployment as a soon-to-be married service member.

Baker and Alex Thomas had been engaged for less than a year when he volunteered for this mission. The longest they had been apart was a week before he left.

“I’m used to him being around,” said Thomas. “The first week felt normal because I traveled for work. Then I reached out to my sister-in-law because my brother is in the military. I was curious about how she managed it with three children. She shared that it would get hard some days and pointed out that communication was much better than in the old days.”

Before Baker left, he and Thomas created a list of milestones they would meet to stay connected and help countdown until his return. One item on the list was watching their favorite show. “We made it a priority to watch it together at the same time, so it was something we both looked forward to,” Baker said. Every episode served as a weekly countdown until Baker would return – right around the show’s finale.

It was these small commitments and shared experiences that led Baker and Thomas to agree that their relationship is stronger despite their time apart.

“It really put into perspective the importance of the day-to-day in our relationship. It’s not just about the big grandiose things that you do for one another; every moment, even a kiss goodbye means something,” said Baker. “Our advice is to cherish every moment. Good or bad, everything counts. You grow together, sometimes painfully but if you stick with it, you’ll come through it stronger.”