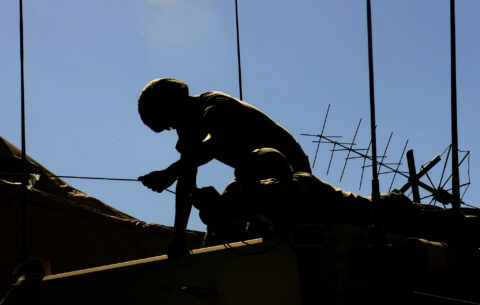 June 13, 2018 (CAMP ATTERBURY, Indiana)  — “A Warfighter is an exercise that allows the Division to evaluate their ability to maneuver assets in a battle,” said Master Sgt. Greg Weaver, the Operations Non-Commissioned Officer in Charge for the Division Headquarters and Headquarters Battalion. “It is designed to focus on particular areas and specific objectives to be evaluated or tested.”

The Division has geared its’ planning and training efforts in preparation for Warfighter since July 2017. Coordinating transportation for Soldiers and equipment was often on the mind of Maj. David Johansson, the logistics officer for the 34th ID. With the coordination of Johansson and his team, troops and equipment all converged on Camp Atterbury, enlisting the help of 89 railcars, 280 tractor-trailers, and nearly 50 buses for the movement.

“I like to say my job is to ‘quiet the noise'”. Johansson continued, “The noise being a real life logistical problem that could impede the exercise.”

In the last three years, Johansson has coordinated logistics for a battalion sized movement overseas to NATO’s Sabre Strike, a brigade sized movement to the National Training Center in California, and now a division sized movement to Warfighter in Indiana. With more and more experience, the Division has become increasingly proficient in moving Red Bull units around the globe.

Running parallel with the logistical planning for the Division Warfighter, the Red Bulls conducted three Command Post Exercises (CPX). A CPX is performed by the leaders, their battalion staff and subordinate units, where they collectively coordinate, plan and synchronize operations for a mission.

Utilizing an effective and efficient crawl, walk, run ideology, stated Weaver, exercises have built up the Division’s ability to be successful during Warfighter. The exercises progressed from CPX1 where Soldiers set up their equipment and started building content, to CPX3 where Soldiers setup all their equipment, validated all its’ functions, finalized content, tore it down and relocated to reset it all up again in just three days time.

With the last of the lead-up exercises complete and a logistics plan implemented, the Reception, Staging, Onward Movement and Integration (RSOI) process begins as soon as the first boots hit the ground at Camp Atterbury.

“In RSOI, Soldiers are processed in, given lodging assignments, issued meal cards, and briefed on proper protocol,” Weaver said. “This is really where we set the stage for the days to come, making sure Soldiers are given all the pertinent information to operate in the training area we’ve been provided.”

Camp Atterbury has been built up over the last decade by the Army as a primary location to conduct division level warfighters. Weaver also added, the main draw for such an exercise is the increased capability to house and feed more Soldiers as well as support a network infrastructure of this size and complexity.

With the completion of RSOI and logistics taken care of, the focus is shifted to kicking off a successful Division Warfighter for the Red Bulls.

Johansson said, “I feel very comfortable to use this exercise as a validation for our slated mobilization this fall.”

The 34th Red Bull Infantry Division’s Warfighter exercise is the capstone exercise used to validate the unit’s collective readiness and capabilities prior to deploying. Soldiers slated for the mobilization are based out of Rosemount, Inver Grove Heights and Faribault. The planned deployment is expected to last up to one year.