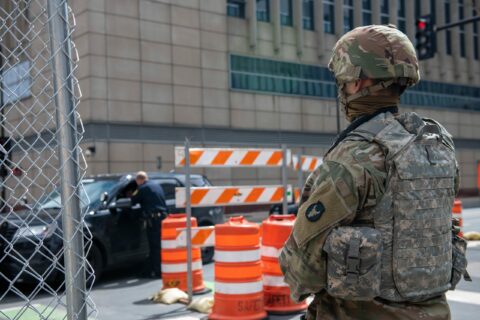 “Our Guardsmen have been doing great things in a challenging situation,” said Maj. Gen. Mike Wickman, Commanding General of the 34th Red Bull Infantry Division. “I’m proud of their efforts and appreciate their hard work and professionalism.”

The Minnesota National Guard is part of the unified command of Operation Safety Net, which includes law enforcement agencies at the state and local level. Planning for the operation began months ago in order to ensure the safety and integrity of the judicial process. The first Minnesota Guardsmen began providing security at the Hennepin County Government Center on March 7.

Units from the 34th Red Bull Infantry Division come from communities across the state and encompass nearly all of the soldiers in the Minnesota National Guard. Airmen from the Minnesota National Guard’s 133rd Airlift Wing and 148th Fighter Wing have also been activated for this mission and are working alongside soldiers in missions to help maintain peace and stability in the metro area.