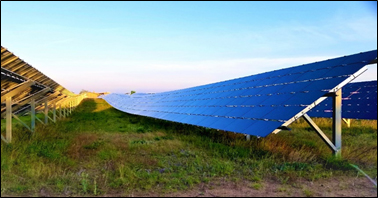 January 29, 2021 (ST. PAUL, Minnesota) — According to an old Scottish proverb, the best-laid plans often go awry. Fortunately that saying does not apply to the Minnesota National Guard’s 30 year plan for sustainability.

The initiative was developed in March 2015 in response to President Barack Obama’s Executive Order 13693, “Planning for Federal Sustainability in the Next Decade.” The Minnesota National Guard stainability program is focused on compatible land use, energy reduction, waste diversion, and water conservation.

The Minnesota National Guard created a Sustainability Working Group, or SWG, to keep leadership informed and guide their decision making process on sustainable initiatives.  This ensures the organization is always progressing towards increased resiliency goals.

The group has received National Guard Bureau recognition for their accomplishments in energy, water and waste reduction, but despite the accolades, there is much work to be done. That is why the SWG has partnered with outside entities and state agencies to aid their sustainability objectives. Camp Ripley’s Environmental Supervisor, Jay Brezinka, believes these partnerships are invaluable.

“One of the tools at the Minnesota National Guard’s disposal is the state of Minnesota’s B3 program, which helps track energy and water at over 90% of the MNNG’s facilities,” said Brezinka. “This data in turn has helped to optimize schedules for building systems and identify buildings that should be prioritized for retrofitting with the integration of state-level sustainable building code guidance.”

The partnership with the Minnesota Pollution Control Agency provides members of the Minnesota Retiree Environmental Technical Assistance Program to conduct energy, water, and waste audits at armories throughout the state. The recommendations of these audit teams are presented to Minnesota National Guard leadership and evaluated. The goal is to build out a 5-10 year plan that addresses older and inefficient buildings.

In regards to new construction projects, Leadership in Energy and Environmental Design, or LEED, standards are required on projects funded by the federal government. This was the case for the newly-constructed General John W. Vessey Readiness Center in Arden Hills, which includes geothermal systems, photovoltaic arrays, and energy efficient equipment that promotes sustainability and energy conservation.

The 62-acre solar field on the Camp Ripley Training Center generates 100% of the post’s annual electricity demand and is an ongoing partnership with utility provider Minnesota Power. That solar power system is the largest on any National Guard installation, and the 10-megawatter solar power plant generates 17,000 megawatt hours (MWh) annually.

Construction and Facilities Management Officer, Col. Sol Sukut, pointed out key benefit of the partnership with Minnesota Power, “It [solar array] feeds into MN Power lines, but is designed to integrate with our micro grid, such that in an emergency it could provide the majority of our power during daylight hours.”

Sukut considers the Camp Ripley solar array to be the crown jewel of the organization’s sustainability plan, but there are smaller initiatives throughout the state that saved the organization thousands of dollars from November 2019 to October 2020.

In 2016, Camp Ripley conducted a waste composition study and discovered that 60 percent of the organization’s solid waste was generated at transient use facilities. It turned out that 45 percent of the total waste stream was compostable.

Thanks to a 2019 partnership with the Minnesota GreenCorps, the Minnesota National Guard expanded waste diversion training and outreach. This led to the growth of organics and co-mingled recycling programs on Camp Ripley and at the Vessey building in Arden Hills. The objective is to reduce solid waste by 75 percent through recycling and composting initiatives by 2030.

The Minnesota National Guard and the State of Minnesota set lofty goals for energy resilience and independence, and the reduction of waste and water use.

Meeting those goals solidifies the Minnesota National Guard’s commitment to accomplishing its mission while being a responsible steward of resources.