Resiliency in the RTI: Warrant Officer Candidate Pushes Through 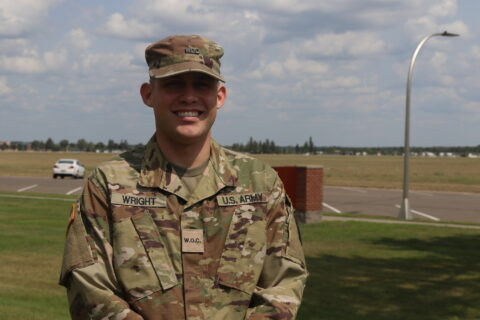 There are 11 candidates enrolled this year who are preparing for their final two weeks of training at Camp Atterbury, Indiana this fall.

Each year the class reports in February or March for an optional phase zero. It isn’t until April when they begin the first phase of training. For the next five months, the candidates report to Camp Ripley for two-to-three day drills.

“You have to do the majority of the work between drills,” said Chief Warrant Officer 3 Jeremy Haak, Senior Training, Advising and Counseling Officer (TAC). “It can be very challenging juggling home, work and Army life while still being prepared when you show up each month.”

This can be challenging for some candidates more than others.

While participating in the WOCS Course, Candidate Thomas Wright II learned that his father had passed.

His dad, also named Thomas Wright, was an active-duty soldier before he entered the Minnesota National Guard in 1991. In 2008, the same year Wright enlisted, his father retired as a first sergeant.

“The amount of Army experience and the amount of mentorship that I could still get years later from him,” said Wright. “That’s how I find myself where I’m at.”

For the TAC Officers, whose job is similar to a drill sergeant, it can be challenging to develop a level of trust high enough for the candidates feel comfortable asking for help in times of need.

“It’s everything that a drill sergeant does because we are responsible for the standards,” said Haak. “But at the same time, our expectations are a little higher because they have experienced that already.”

Even though the TAC officers’ purpose is to make sure the candidates maintain the standards, they are also there to help take care of them, solve problems and enable them for success.

“Each candidate has their own unique set of challenges and strengths as they go through the course,” said Haak. “The beginning of the course is tougher, but as it progresses, they learn how to think like a warrant officer and a leader.”

During phase two of WOCS, each state with a class will arrive at Camp Atterbury for a two-week annual training period. There, they will put their skills to the test during exams and field exercises.

At the end of phase two, the candidates will graduate and commission into the warrant officer corps. The following month, they will come back to Camp Ripley for another pinning and commissioning ceremony before they are released from the WOC program and join the other 230 warrant officers in the Minnesota National Guard.

For Wright, who is an AGR soldier, when he finishes the course, he won’t be pinned as a warrant officer. Instead, he will receive a certificate of eligibility and continue working as a supply sergeant for the HHC 2-147 Assault Helicopter Battalion at AASF1 until a warrant officer position opens on the AGR side. He will then make the choice to apply and become a warrant officer or stay enlisted.

“Even if I don’t get WO1, the basic leader things I’m learning for the first time or relearning in WOCS,” said Wright. “I’m actually enjoying working with soldiers, teaching them and getting to know them.”