Siblings Ski and Serve Together in Minnesota National Guard 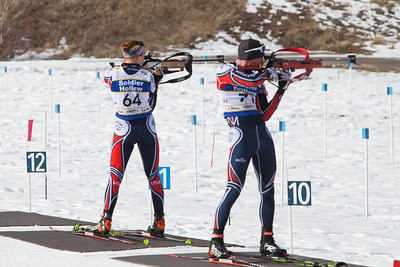 February 20, 2020 (ST PAUL, Minnesota) – From Belarus to Chile to Northern Italy, biathletes and siblings Siena and Jakob Ellingson have been able to compete at high levels while serving in the Minnesota National Guard as specialists and motor transportation operators with the 114th Transportation Company.

Despite not learning how to ski until age 12 for Siena and high school for Jakob, the Ellingsons developed a passion for biathlon.

“Skiing began as a way to stay in shape for soccer,” said Jakob. “But in soccer you have to be really talented, and work hard, and everything has to line up right for you to make it big. With biathlon, there are a lot fewer people, so you just have to work hard and you have a good shot at it.”

A biathlon competition consists of shooting and skiing. Competitors ski a cross-country route with an overall distance divided into two or four shooting rounds, half in the prone position, the other half standing. Depending on how many targets out of five are missed each shooting round, a penalty loop is added to the competitors total distance which increases their overall time. The competitor with the shortest time wins.

The Ellingsons’ biathlon careers started to gain momentum in Grand Rapids, Minnesota. They began to train with the director of youth development for biathlon in the U.S., Vladimir Cervenka, in the off-season. They trained throughout the year and stayed in northern Minnesota because they were home-schooled, had the time and were willing to do the work.

The decision to join the National Guard was a stepping stone in their biathlon career, Siena said. They had competed with National Guard biathletes at many of their competitions.

Although each of them came to their decision individually, they ended up enlisting on the same day in September 2017. All of their lives they’ve been together. Siena and Jakob both enlisted as motor transportation operators and attended Basic Combat Training and Advanced Individual Training together at Fort Leonard Wood, Missouri.

Within a week of returning from Fort Leonard Wood, Missouri, they drove to Camp Ethan Allen Training Site in Jericho, Vermont, to begin biathlon training with the National Guard full time.

Siena and Jakob traveled throughout the U.S. and around the world for biathlon competitions before joining the National Guard, and have been able to continue to travel, now representing the Minnesota National Guard.

Between traveling in high school for biathlon training and competitions and since living in Vermont, Siena and Jakob joke that home is wherever their suitcase is.

“We always joke that we never knew where home is. Is it Vermont? Is it [Minnetonka]? Is it Grand Rapids?” said Siena.

Siena originally joined the Minnesota National Guard for biathlon, but membership has become much more than that, she said. The benefits she receives as a Soldier are great, but being able to represent something bigger is what drives her to perform at her best. At basic training, she learned what it meant to wear the Army uniform, and it carries through to her race uniform.

Jakob took a step back from full-time training and returned to Minnesota in September 2019. He now works at a ski shop where he is on a different side of the sport and takes care of others and their equipment needs. He is in school earning a bachelor’s degree. He is also considering applying to become a helicopter pilot in the Minnesota National Guard.

Siena continues to train full-time in Vermont with about five others on the National Guard biathlon team. In Vermont, she mostly trains for biathlon, but also keeps up with Soldier tasks such as land navigation and marksmanship.

Biathletes are able to compete for years, said Jakob. It’s not like other sports where athletes retire because of their bodies. Some competitors are in their 40s and 50s.