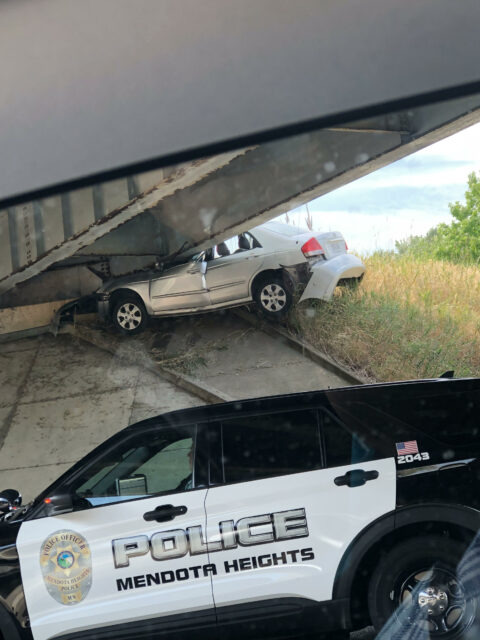 September 13, 2021 (ST. PAUL, Minnesota) — She was driving south of Interstate 35E just south of St. Paul, Minnesota, on a Friday afternoon when out of the corner of her eye, something caught her attention. She looked over and saw that a sedan had driven up an embankment and wedged itself underneath the overpass. Then she saw a Soldier running up the embankment to the vehicle.

Reed had witnessed the sedan crash and immediately pulled over to help.

“The Army gives you confidence to react,” he said. “Most military members I know run toward problems. So when you see something like that, I’m sure a lot of people wouldn’t stop out of fear of not knowing what to do.”

With over 24 years in the military as an infantryman and combat medic, he was able to assist in getting the passengers out of the car and to safety as smoke began to come from the car.

While Reed was helping the passengers with others who had pulled over, Bailey called 9-1-1 to report the accident. For her, it was also instinctual to pull over and help in whatever way she could.

Military training helps service members remain calm and be there for others, she said.

Not only were two Minnesota National Guard members on scene, an off-duty doctor, nurse, and firefighter arrived as well. The stars seemed to align to have all of these people who could help be there at the right time, Reed said. Thankfully the passengers were okay.

This situation proves yet again that Minnesota Guard members feel a sense of responsibility to the state of Minnesota, its people, and that we are trained and ready to help, said Reed.