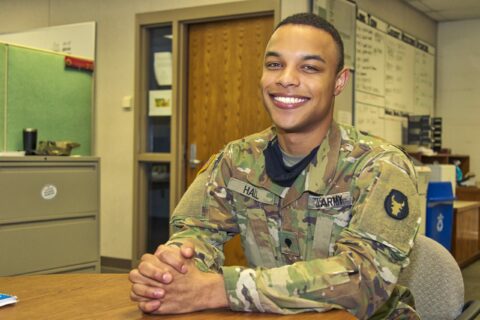 February 22, 2021 (CAMP RIPLEY, Minnesota) — Minnesota National Guard strives to be a diverse organization. For one Soldier, the diversity surrounding him is his favorite part about serving as an Automated Logistics Specialist with G Company, 134th Brigade Support Battalion at Camp Ripley’s Consolidated Maintenance Activity-South.

“People had their established relationships,” said Spc. Romeo Hall about his first day at CMA-S. “When I walked in, I saw people bantering; it was very relaxed. Diversity is needed to have a cohesive environment, and that’s what we have here.”

Hall, his three siblings, and mom moved from California to Minnesota when he was six years old. His mother worked three jobs to take care of them. When he enlisted in the National Guard at 18 years-old, Hall was accepting a big commitment and therefore taking a big step in his life.

Since starting at CMA-S almost two-years ago, Hall has discovered mentors among his coworkers. The first being Sgt. Kelsi Davis and the other, CW3 Clint Ebsen.

Davis was the first person Hall saw to initiate banter in the workplace. She was also very patient with him while he was learning and has inspired him by her work ethic.

“I will answer to her so fast out of respect,” said Hall. “And the other leader I look up to would be Chief Ebsen.”

Hall admires Ebsen’s attitude about not stressing about unimportant things. As a Production Control Supervisor at CMA-S, Ebsen has a strong desire to encourage his subordinates to be good people and even better soldiers. He has an admiration for Hall as well.

“He is an extremely hard worker and at his young age it is inspiring to me as an older soldier,” said Ebsen. “We are lucky to have him here and he honestly makes us all a little better

Hall doesn’t wait until February to celebrate his culture. It isn’t uncommon to walk into the office and hear his favorite Black artists playing. During the observance however, he likes to honor the numerous accomplishments of African Americans.

“It’s important to celebrate it,” said Hall. “We created food, culture, styles, hip hop and rap. We created all these beautiful things that the world enjoys.”

As a kid, Hall struggled in school and worried about whether he would graduate. After succeeding, a weight was lifted off his shoulders. His high school diploma is one of his greatest accomplishments. Since his enlistment, he has learned the importance of education and is proud of the opportunities the Minnesota National Guard has offered him.

“I left for basic training with no license, no car, no nothing,” said Hall. “Within a few months of coming back, I had my license, a car and I’m living on my own; I’m not struggling financially.”

Joining the Minnesota National Guard gave Hall another family. During this year’s Black History Month, take the time to celebrate diversity in the ranks and remember this year’s theme: The Black Family. And finally, take this opportunity to celebrate like Hall would.

Black History Month is an annual celebration of achievements by African Americans and their effect on the history of the United States.

On February 1st, 1986 Congress officially dedicated the month as “National Black (Afro-American) History Month.” Each year Black History Month is celebrated the Association for the Study of African American Life and History selects a theme. This year’s theme is “The Black Family.”