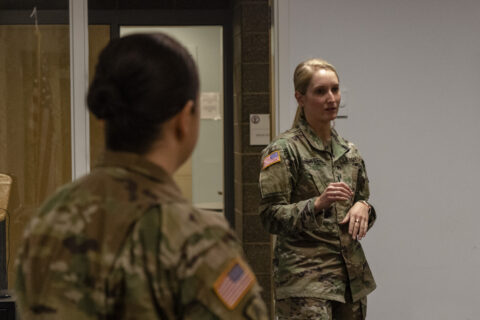 March 14, 2022 (SAINT PAUL, Minn.) — At the St. Paul-based armory,leaders of the Minnesota National Guard’s Women’s Special Emphasis Council (WSEC) hosted an informational event and breakfast on March 14, 2022. The hour-long discussion served as an introduction to the WSEC and the various other councils open to new members throughout the Guard. The meeting was geared towards informing individuals who have not served on a council before.

The event kicked off with an overview presented by leaders of the WSEC, including Army Maj. Gen. Johanna Clyborne, the effort’s executive champion. The attendees focused on information about the Women’s Leadership Forum, which occurs each fall.

“The intent of the leadership forum is to ensure that there is not a single female in our formation who cannot reach the highest levels of where they want to go,” said Clyborne. “…being involved [in the counsel], impacts not just your careers, but the women who are coming up after you and the men that you serve alongside.”

The idea for the council began when, now retired, Command Sgt. Maj. Cynthia Kallberg decided to start focused career mentorship with her fellow enlisted women. After a few months, she and three other service members presented this model to the leadership. During that time, then 34th Red Bull Infantry Division’s Commanding General, Army Maj. Gen. Neil Loidolt approved the plan to institute the Women’s Leadership Forum to the entire force.

“[Maj. Gen. Loidolt] looked around the table to all the brigade commanders, and he said, ‘until we achieve parity in all aspects of our organization, we are going to have and will need a women’s forum,’” said Clyborne. “You all need to participate in it because you are part of that solution.” Clyborne encouraged members of the Guard, both Army and Air, to participate in a council and address the problems they see and to help make the organization better now and in the future.

More information can also be found at the Minnesota National Guard’s Diversity Initiative Facebook page highlighting events from all eight special emphasis councils. The council noted that members interested in joining can contact their team at (651)-282-4733.

“General Best, General Horvath, and myself, while we are here we can make sure that the path is as smooth sailing as possible. You are our future,” said Clyborne. “You are the ones coming after us that are going to make sure we continue in the path that we need.”