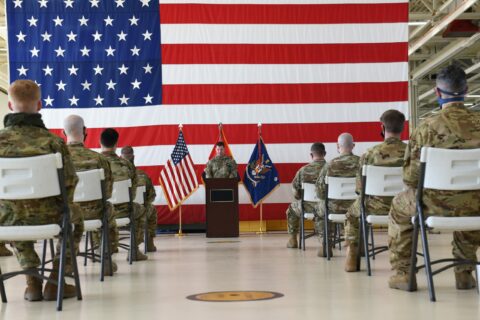 “Your unit is the most valuable asset to the Combined Joint Task Force Inherent Resolve and Spartan Shield,” said Col. Gregory Fix, commander of the 34th Expeditionary Combat Aviation Brigade which recently returned from the region. “You already know you’ll be the hardest working aviation unit, relied upon to move cargo and personnel long distances in five countries.”

The unit flies CH-47 Chinook heavy lift helicopters and will provide aerial movement of troops, supplies and equipment for support of maneuver, combat support and combat service support operations. The Soldiers will travel to Fort Hood, Texas, and join approximately 75 Soldiers from the Iowa National Guard’s 1-171st GSAB for additional training prior to travelling overseas.

“Bravo Company is comprised of battle-tested aviation professionals that are at the height of their skill,” said Capt. Vincent Gonsior, commander of the deploying troops.  “For me as commander of this unit, it has been one of the greatest honors of my life to fly with and learn alongside the senior members of this unit.”

Due to COVID-19 restrictions, the ceremony was held virtually, allowing the unit leadership to thank the families watching online for their sacrifices while their loved ones are deployed.

“We miss not seeing those family members today as we recognize this unit and those who support them,” said Fix.

Of the approximately 60 Soldiers deploying, one-third have at least one dependent family member. The deployment will be the first for 40 of the Soldiers, but 20 of the Soldiers have deployed one or more times previously.

“The Soldier isn’t the only part of a family that sacrifices,” said Gonsior. “Ultimately, we volunteered for this. But in a sense, our families are drafted. To the families and loved ones of Bravo Company, we can never thank you enough for your willing support and sacrifice.”