The Family That Warfights Together, Stays Together 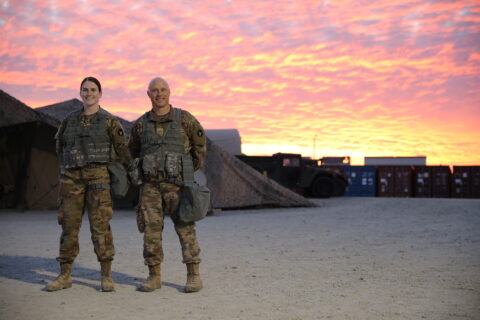 Oct. 12, 2021 (FORT RILEY, Kansas) — Many understand the idea that when one joins a military unit, they essentially become part of a family. That figurative idea became very literal for Spc. Emma Brown when she found out that her first duty assignment would be Division Headquarters and Headquarters Battalion (DHHB), 34th Red Bull Infantry Division.
Spc. Brown, a geospatial engineer, was headed to the same unit that where her father, Maj. David Brown, serves as a plans officer.

“Initially, I was shocked we would be in the same unit and thought about how rare the chances of it actually happening would be. It was pretty comforting being able to talk to him about how the Minnesota Guard worked because I had a ton of questions, especially being since I was brand new to the military,” said Spc. Brown. “Also, I had joined the military in big part because of my dad so it was really awesome to find out we’d be drilling together when I returned home.”

Maj. Brown commissioned into the Minnesota Army National Guard in 2009. Having served three years in the Navy at an earlier point in life, Maj. Brown retained his passion for service.

“September 11th was a big influence that originally motivated me to join. Life events required a break in service, but my love for the military did not have a break. As a result, when I could re-commit to serving I sought out options and the Minnesota Army National Guard was the best enterprise and community I came across,” said Maj. Brown.
The father and daughter have both been serving in DHHB together since April of 2020. Spc. Brown is only two and a half years into her military career while her father is in his 15th year of service.

“I’d love Emma to continue in the military after her contract expires, but I know there is a lot happening as she works to move forward with her career,” said the major.

Spc. Brown is currently a full-time student at the University of Minnesota-Twin Cities studying Sociology, with a goal of going on to medical school after she completes her degree. She also works as a certified nursing assistant and participates in powerlifting competitively.

“I’m not sure I’ll be able to balance my Guard career with the requirements of medical school once I get to that point. But we will see,” said Spc. Brown. “What I’d like for my father’s career moving forward would be as relaxing and rewarding finish to his military career as possible. He has been in for over a decade now, accomplishing so much… I am extremely proud and grateful to him.”

Though at very different places in their military careers, both went with DHHB to Fort Riley, Kansas for Warfighter Exercise (WFX) 22-1. The exercise spanned three weeks, with long operating hours in a highly stressful environment.

“I love seeing her while on drill. It makes time away, especially here at WFX 22-1, way easier. Missing your family can be difficult. Having my daughter here makes me happier and helps time pass more enjoyably,” said Maj. Brown. “This helps me stay focused on the fight and all the other items required while serving. I especially love the serendipitous moments where we run into each other and can smile and spend some time catching up.”

“Those interactions make a huge difference,” said the specialist. “It helps me to know that I am not alone because someone close to me is experiencing the same kind of stress and events. Also, it has been pretty interesting seeing how our jobs intertwine within the Guard.”

It is a rare instance that one can go away on military time and be led to a family reunion to see family, but for the Browns, they’re fortunate to have that opportunity.