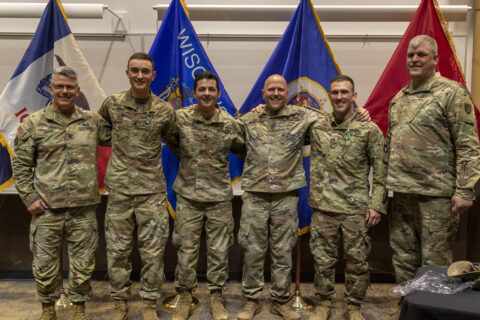 “They put in an extra effort and compete, to be better versions of themselves,” said Command Sgt. Maj. John Raines, the 13th Command Sergeant Major of the Army National Guard. “And that’s what this whole event is about. It’s about being the best version of you, so you can represent your family, your state, and the whole Army National Guard.”

Twelve Soldiers competed to earn the regional title of noncommissioned officer of the year or soldier of the year, and advance to the national competition at Camp Smyrna, Tennessee in July.

The five-day competition tested Soldiers and noncommissioned officers technically and tactically through a series of 24 events including weapons qualification, fitness, land navigation, a ruck march, an obstacle course and more, designed to be physically and mentally taxing.

“The Best Warrior Competition is designed and run by NCOs and Soldiers for NCOs and Soldiers,” said 1st Sgt. Keith Swanson, the noncommissioned officer in charge of the competition. “Preparing them at this level will help them identify where they need to train in order to compete at the next competition. Win or lose, the competitors will take their newfound skills and experiences to their units and fellow Soldiers back home.”

The event opened with a welcome brief followed by the first events of the week: a written exam and an appearance board.

The second day started early, as the competitors woke before sunrise to begin the fitness test. Following the test, they piled into busses for a short drive downrange to begin a long day of weapons qualifications.

Throughout the day, Soldiers qualified on the M4 carbine, M17 pistol, and M240B machine gun. They also conducted a stress shoot which involved elevating their heart rates by running while carrying heavy ammunition canisters. Once heart rates were elevated, the service members were tested on their ability to put rounds on targets using the M2 machine gun, M4 carbine and M17 pistol.

Following the completion of the day’s events, the competitors were quickly brought out of the field to seek shelter on base from a severe bought of Minnesota weather that included a thunderstorm downpour and tornado warning.

“I think people really dislike the rain, but I love rain; I love sunshine,” said Wallace. “Getting a great mix of all of it has just been fantastic.”

Once the all-clear was given, the competitors traveled to their home for the rest of the competition: a small, metal warming shack at the Biathlon Range.

Tired and dirty, yet invigorated, the Soldiers prepared for day three’s Army warrior task lanes by visiting the medics, tending to their personal needs and focusing on getting as much sleep as possible.

“I think it’s a missed opportunity when people don’t do the ‘hooah’ stuff,” said Wallace, referring to the exciting parts of military training. “At the end of the day, this is a lot of phenomenal training turned into a competition. The fact that we are able to participate in this environment and the Minnesota Guard [members] are seriously amazing at taking care of all the competitors, it’s great!”

Day three began with another earlier morning as the competitors moved out to complete Army warrior task lanes with the NCOs assigned to the East lanes and Soldiers at the West lanes.

On the West lanes, Soldiers tackled a test on calling for artillery fire, moving a simulated casualty and heavy canisters of 25mm ammunition over water via the ‘Row the Boat’ event, another patrol lane, testing on the M320 grenade launcher and hand grenades, maintenance and service of a military vehicle, and a simulated media interview.

In the evening, Soldiers and NCOs conducted a second mystery event involving assembling three weapons in five minutes with a twist: they did it in the dark with only night vision goggles. Once the sun set, the competitors began a night land navigation course.

On day four of the competition, the NCOs and Soldiers switched lanes.

One of the Soldiers came face-to-face with a tough decision during the ‘Row the Boat’ challenge.

“When I crossed the lake, I tried to secure the boat to the dock,” said Spc. Aaron Fiscelli, Saint Claire, Michigan, a Health Care Specialist with the Michigan National Guard’s 1171st Medical Company Area Support Company. “The rope slipped, and the boat started drifting away.”

He then had the choice of failing the event or somehow recovering the boat.

“I jumped in the water and took charge,” he said. “If you can be wet and uncomfortable that’s fine; that’s what the competition is all about.”

Fiscelli later explained that while this competition is mentally and physically exhausting, as a competitor you have to find out where your true limits are because your mind stops before your body does.

“My body is a bit sore right now, but mentality dictates reality,” he said.

In the early morning hours of the final day of the competition, participants travelled deep in to the woods of Camp Ripley and began a 12-mile ruck march along the Mississippi River which was followed by a mystery event involving quickly disassembling and reassembling an M4 carbine.

During the awards ceremony, all competitors received an engraved plaque commemorating their participation in this year’s competition.

In the Soldier category, Spc. Nathanial Miska, of the 850th Engineer Company, Minnesota National Guard, was awarded the 2022 Region IV Army National Guard Soldier of the Year. Sgt. Joshua Kleinhans of the Wisconsin National Guard was the first runner-up and Spc. Kyle Lawson of the Indiana National Guard place as the second runner-up.

“Winning regionals for me is the honor of a lifetime,” said Miska. “Not only do I represent Minnesota, but I also now hold the responsibility of representing the six states I competed against.”

With National’s in July, Miska is sure he will have enough time to further develop his skills and perform better than he did this week.

“I am training to bring Region IV the representation it deserves,” he said.

“I’m most excited to compete and represent the Minnesota National Guard at the next level,” said Carlson. “My sponsor, Sgt. 1st Class Snater and I have had a really good team dynamic, and I look forward to competing alongside Spc. Miska. It’s awesome that Minnesota is representing both the Soldier of the year and the NCO of the year.”