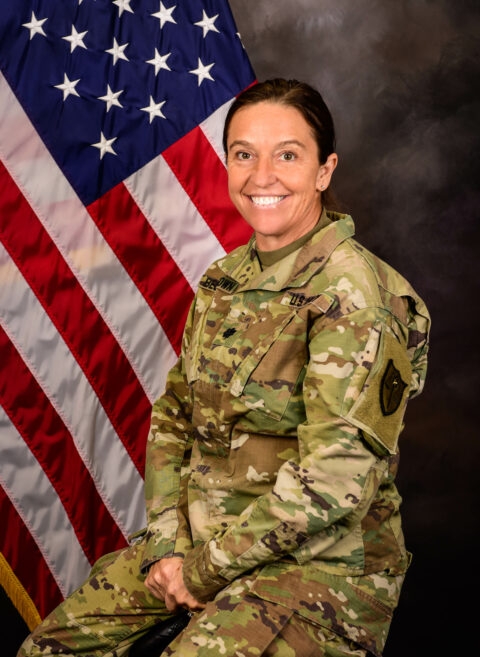 Editor’s Note: In this series we meet the people who serve their state and nation in the Minnesota National Guard. We take you beyond the names and titles and discover the reasons for service and the different paths taken to get to where they are today, in their own words.

Q: Where are you from, and what made you join the Minnesota National Guard?

A: “I was born in Wolf Point, Montana, on the Fort Peck Indian Reservation. As a child and young adult, I lived in several places and eventually decided to attend law school at William Mitchell College of Law in St. Paul.

My decision to join the military is a combination of factors. I have some great military role models, and I needed the financial benefits of serving. My grandfather served in the Army during WWII, and my father was a Marine in Vietnam. Serving and getting help with college tuition seemed like a win-win.

I was a truck driver in the North Dakota National Guard for my initial enlistment. My recruiter told me I would get the most significant bonus in that Military Occupational Specialty. As mentioned, I needed money for school and agreed to a truck driver MOS.  Shortly after returning from basic training and school, I transitioned to a combat engineer unit, building ribbon bridges. When I decided to attend law school in Minnesota, I did an interstate transfer to a paralegal position at the 34th Red Bull Infantry Division’s Headquarters, Headquarters Company. That was in 1999, and I have been a Red Bull since then.”

Q: Were you a lawyer before joining the Guard?

A: “No. Although, I was dreaming of being a lawyer.”

Q: Where do you currently practice law, and what is your role within the Office of the Staff Judge Advocate?

A: “I am an Assistant Hennepin County Attorney, where I practice civil and criminal law.  As a Judge Advocate in the Minnesota National Guard, I am the Midwest Regional Defense Counsel. Trial Defense Service (TDS) is unique to the Guard. My team has 33 attorneys and paralegals from nine states.  The TDS chain of command goes up to me and then to the National Guard Bureau Chief of TDS. It requires some significant coordination but ensures that each defense attorney is comfortable fighting zealously for their clients.”

Q: How is your Native American culture tied to your military service?

A: “From as early as I can remember, I knew that Veterans are honored and respected. We have ceremonies that integrate that respect into our culture. The first dancers into the circle at a pow-wow are Veterans carrying a U.S. flag, the tribal nation flag, eagle staffs, and the POW flag. Drum groups play Veteran honor songs. There are ceremonies to keep Veterans safe as they leave for war and welcome them home when they return.  These are some examples, but there are many others.”

Q: Why do you think Native Americans tend to serve in higher numbers than other ethnicities?

A: “There are 574 recognized Native American Tribes in the United States. Each of them has its own culture, beliefs, history, and government. To make a general statement is tough. However, Native Americans served in the American Revolutionary War and every major conflict since then.   Today about 19% of Native Americans have served in the military, which is higher than any other demographic. I think that Native’s serve for the same reasons as other groups: strong family ties to service, help pay for education, and experience the adventure of serving. Warrior traditions, government-to-government relations with the U.S., and responsibility for defending Native homelands have also inspired the enduring legacy of military service.