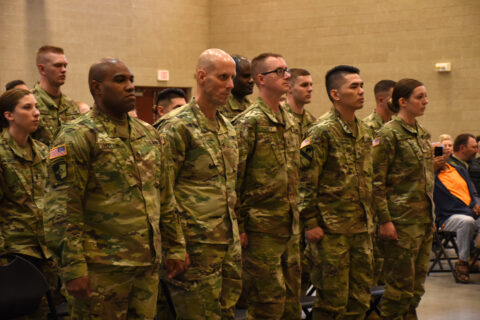 May 18, 2019 (ARDEN HILLS, Minnesota) – Family, friends and community members honored six soldiers from the Minnesota National Guard’s 147th Human Resources Company, May 18, 2019, prior to deploying to Afghanistan in support of Operation Freedom’s Sentinel.

“This team will have one of the most somber, and mentally and emotionally-challenging missions in Afghanistan,” said Col. Stephen Schemenauer, Commander of the 347th Regional Support Group. “Dealing with casualties on the battlefield in support of the theater combat support hospital where they will conduct casualty operations and reporting for the coalition’s joint task force headquarters.”

The six soldiers will serve as a casualty liaison team and are the third team in an ongoing rotation of four from the unit that have been conducting the mission in Afghanistan.

During the deployment ceremony, leaders from the Minnesota National Guard thanked the families for their sacrifices and reassured them of their commitment to providing resources and support while their loved ones are away.

“They are only able to balance careers, personal lives and military duties with the love and support of their families and employers,” said Schemenauer.

The soldiers will travel to Fort Bliss, Texas, where they will conduct additional training prior to their deployment overseas.

“I have no doubt that you will make this brigade, the Minnesota Army National Guard and our state extremely proud,” said Schemenauer. “Take care of yourself, take care of each other and rest assured that we will take care of your families back here.”