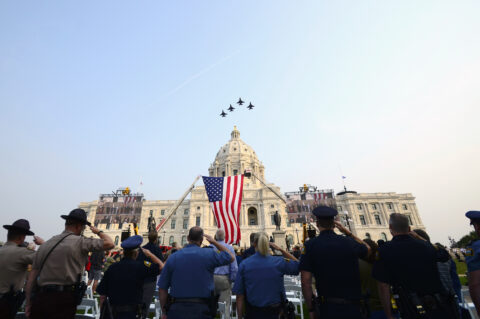 September 13, 2021 (SAINT PAUL, Minnesota) – On Sept. 11, 2021, we stood with Minnesotans and the nation at the state capitol complex as we remembered the events on 9/11, twenty years later. The event not only remembered the lives lost on that day, but also service members from Minnesota who made the ultimate sacrifice following that day.

“From Gettysburg to Kabul, Minnesotans have been there,” said Minnesota Governor Tim Walz at the event. “This remembrance is about telling the stories. As we get further from events, our memories fade, both individually and collectively. And it becomes harder to tell that story.”

“Let us not for one minute believe that any of these sacrifices were in vain,” said Walz. “These service members, these 40,000 Minnesotans, they changed the world for the better. Some in small ways, some in profound ways.”

The commissioner of the Minnesota Department of Veteran Affairs echoed the governor.

“We honor and recognize the purpose and sacrifice our military has made on behalf of our country and the people of Afghanistan,” said Larry Herke, the commissioner of the Minnesota Department of Veteran Affairs. “Thank you to my fellow Minnesota Veterans for your service during the Global War on Terrorism.”

The day began with a special observance to include the reading of the names of Minnesotans lost on 9/11 and those service members killed in hostile action since that day, along with several moments of silence.

An official ceremony was held that included Maj. Gen. Shawn Manke, the adjutant general of the Minnesota National Guard, and other guest speakers, military honors, wreath laying, and a missing man formation flyover by the Duluth-based 148th Fighter Wing.

The event, hosted by the Minnesota Department of Veteran Affairs along with several other organizations from throughout the state, provided a space for veterans, their families, and other Minnesotans to connect to resources and with each other.

“On September 11, 2001, most of us can recall where we were, who we were with, and what we were doing when the unbelievable happened,” said Herke.

Two documentaries were played throughout the event as well, one produced by the Minnesota National Guard.