Veteran Looks Down the Sights of Legacy and Brotherhood 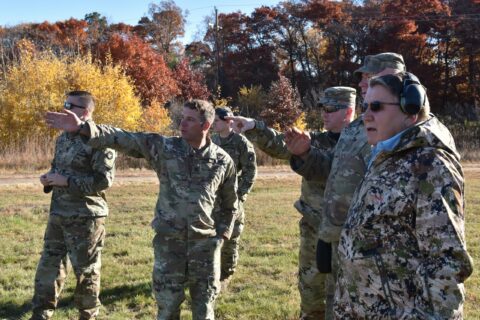 November 10, 2020 (CAMP RIPLEY, Minnesota) – In March of 1970, Spc.4 Rick Hokenson was a part of a 90-man company that marched out of their firebase in South Vietnam in order to patrol an area known as the “Dog’s Head” near the Cambodian border.

Richard Hokenson, of Detroit Lakes, Minnesota, was assigned as a sniper to Charlie Company, 2nd Battalion – 8th Cavalry under the 1st Cavalry Division. “To me growing up in my little town of Detroit Lakes, I was a bit sheltered. It was an eye opener getting drafted, meeting new people from all over and seeing new experiences.”

Just before noon on March 26, 1970, Charlie Company found themselves surrounded and engaged by an overwhelming North Vietnamese Army force. (Later analysis indicated the company had penetrated a large base complex manned by an estimated 400 NVA soldiers with numerous defensive bunkers.)

Spc.4 Hokenson, used his 7.62mm M-14 rifle and powerful scope to busily pick off any hapless NVA soldiers who made the mistake of exposing a face or body part.

Two and a half miles away from Charlie Company, Alpha Troop, 1st Squadron, 11th Armored Cavalry Regiment led by Capt. John Poindexter heard the radio alert for help and at 1:00 p.m. began the drive through heavy jungle with tanks and Armored Personnel Carriers to rescue Charlie Company.

“When those tanks and PCs came on line and opened up, the jungle disappeared,” added Hokenson.

By 7:30 that evening, both American units were returning to Alpha Troop’s original positions.

The rescue of Charlie Company was an unqualified success although accounts of the action and its human costs vary. Total U.S. ground strength was about 290 personnel with casualties estimated at three killed and 90 wounded. A conservative estimate of the well dug-in NVA force estimated a strength between 400 and 600 men. A search of the abandoned battlefield conducted two days after the action found 80 fresh, shallow graves of NVA 272nd Regiment soldiers.

Unfortunately, the story of this skillful, daring rescue went largely unnoticed for four decades, until Oct. 20, 2009, when President Barack Obama awarded the Presidential Unit Citation to Alpha Troop at a ceremony in the White House Rose Garden. More than 80 members of the troop attended, as well as many from Charlie Company. It was a long-overdue recognition for the brave troopers.

50 years since the battle in the ‘Dog’s Head’ Hokenson has returned to Detriot Lakes, Minnesota. He’s had several successful careers, is married to a wonderful woman and enjoys riding his motorcycle through the Midwest. He still stays in contact with the buddies he met while serving in Vietnam, including his company commander George Hobson who retired from the Army as a lieutenant colonel.

In a surprise to Hokenson, he was called one afternoon and asked if he would be interested in visiting with Minnesota National Guard members of the Sniper Platoon, 2nd Combined Arms Battalion – 136th Infantry Regiment while on Camp Ripley.

“When I was invited, it was wow, will I fit in…I was blown away,” said Hokenson.

Several unit members of the ‘Bearcat Battalion’ have traditionally come from the Detroit Lakes area and the timing worked out just right to join up with the Sniper Platoon.

During his visit, he was able to tour around Camp Ripley and see how the National Guard facility operates before going down range to join the snipers on the firing line. “To see the technology and to be there with the guys, it’s like a brotherhood and it felt amazing.”

Richard volunteered to be a sniper and went to the school which was in its infancy with the Army. He attributed his skills back to his days growing up in the Minnesota wilderness and how he used to practice the key fundamentals of shooting even back then.  While on Ripley, he got to see the changes developed over 50 years and try out some of the newer weapons and systems that were created in the shadow of his own era with the program. “We had an M14 with a 10X scope and all our adjustments were done on the fly,” he added.

“It may have been 50 years since he last shot, but you wouldn’t have known it by how well he was doing,” said Capt. Zach Duckworth of 2-136 Inf. “I couldn’t thank Richard enough for coming out and showing us a thing or two.” “I’m proud to be a veteran; I think everyone should do it,” said Hokenson as he bantered with the troops.  “I was amazed and kind of overwhelmed by this opportunity – truly honored. I don’t know how to put into words about how I feel sitting here on Camp Ripley with these fellow soldiers…it’s a brotherhood and I’m grateful.”