‘We owe it to each other’: Power of One, a suicide awareness 5K 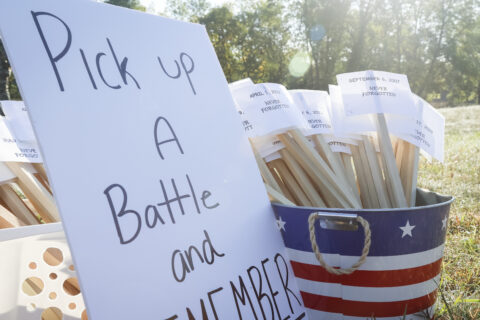 September 11, 2022 (Camp Ripley, Minn.) — On Saturday mornings at Camp Ripley, service members swarm the base, traveling from all over the state, to attend their regular drill weekends. For most, formation marks the beginning of their day.

“I found myself in Iraq and I found that combat was not like it was in the John Wayne movie,” said Master Sgt. Joshua Guyse. “As the deployment continued on, things that I did to cope [and] things I began to bury, allowed me to survive in that environment.”

The crowd had gathered as part of the Power of One. The Power of One is a suicide awareness 5k during the month of September that represents it only takes one person to check on someone.

Throughout the event, Sservice members learn about suicide awareness, substance abuse and resiliency.

“One day I decided I had enough. I found myself at midnight sitting in my jeep crying and said I can’t do this anymore. So, I came up with a plan,” said Guyse. “Out of the blue an Army buddy of mine called and said, ‘hey man, let’s go get some pie at Perkins.’”

The Power of One has been an annual event since 2016, with a short pause during the global pandemic in 2020. This years’ theme is Connect to Protect: Help is within Reach.

“We are taking steps into normalizing reaching out for help,” said Sgt. Maj. Jeanette Chaffee, the resilience risk reduction and suicide prevention noncommissioned officer-in-charge for the Minnesota National Guard. “It shows that we are okay with you not being okay.”

Guyse later explained how his family brought him to the Veteran’s Affairs Hospital and he agreed to spend the night for observation.

“I was not fulltime,” said Guyse. “I’m an infantry man, we don’t talk about feelings as infantrymen.” I had to pick up the phone and call my unit and tell them what was going on. I was terrified to do that, so I had the nurse do it for me.”

What happened next was not what Guyse was expecting.

After the opening presentation, participants were able to select a sign with the date of a Minnesota National Guard service member’s death, to carry it in remembrance of them throughout the run.

“That moment in time does not define you,” said Guyse. “Ask for the help, fight the stigma every opportunity you have. We owe it to each other to take care of each other. It only takes one person to make an effect.”

If you or someone you know is going through a crisis the National Suicide Prevention Hotline is 988, for the Veterans Crisis line dial 988 then press 1.