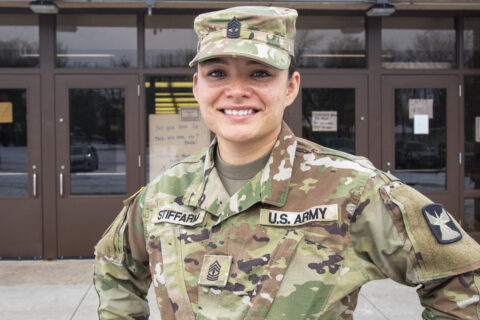 February 16, 2022 (Cottage Grove, Minn.) — Women have been serving in various roles in the military for decades. Some even went as far as to impersonate men during the civil war.

Still today, female leaders are paving the trail for others to follow. Women’s History Month, an annual observance, commemorates women and their contributions.

“It’s a moment to reflect and honor those who have paved the way for future generations,” said Army 1st. Sgt. Jessica Stiffarm, the first sergeant of the Minnesota National Guard’s 147th Human Resources Company (HRC). “And to highlight the things women have done to get where we are today.”

Throughout her 18-year career, Stiffarm has deployed three times. However, she learned that she wanted to continue serving beyond her first enlistment on her first deployment. She believes that the deployment positively changed her life.

During the deployment, she also learned what she wanted to do as a career. After returning home, Stiffarm began a law enforcement program at the Minneapolis Community and Technical College.

Outside of the military, she continues to protect and serve the state of Minnesota as a police officer with the St. Paul Police Department. She has worked at the department for five years but has been a police officer for eight years.

“Working in law enforcement and being a first sergeant, the biggest thing is being able to make a positive impact,” said Stiffarm. “I like being able to connect with people because, at the end of the day, we are all just trying to figure out the best possible solutions to help serve the community.”

As the first sergeant at the HRC, Stiffarm has a unique opportunity to serve with an all-female command team and full-time staff.

“That’s the first time I’ve seen that in my career,” she added. “If it was Spc. Stiffarm seeing that, I would say ‘I can do this.’”

“Taking extra time to help with those events shows women in the Minnesota National Guard and the community the impact we have as leaders,” said Stiffarm. “It shows we’re here, and we are doing good things for the state.”

“They’ve championed for me, even at times when I had no idea, whether it’s in my military career or my civilian career,” she added. “What they are doing for me, I am turning around and doing the same for my Soldiers.”

Aside from those three, Stiffarm has many other leaders who model qualities and characteristics she admires. During her unit’s annual training last year, Stiffarm had the opportunity to work with the 347th Regional Support Group Command Sergeant Major, Command Sgt. Maj. Shannon Froiland. Stiffarm was impressed by her ability to always care for Soldiers and leaders, even in stressful times.

From this experience, Stiffarm has developed new tactics that she uses during drill weekends.

“I’ll have all the leaders go around the room and say what they’re thankful for,” said Stiffarm. “That’s one of my favorite things I took from Command Sgt. Maj. Froiland because it shows us there are so many things to be thankful for, despite the long hours or stressful days.”

Stiffarm strives to positively influence her service members and help them as much as she can.

“Always put the Soldiers first, and everything else will follow,” she added. “I might help one person in a positive way, and that inspires me to keep going.