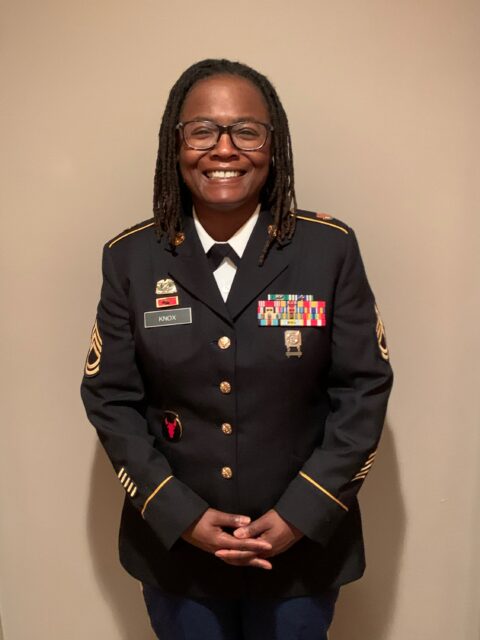 March 18, 2022 (COTTAGE GROVE, Minnesota.) — Women’s History Month showcases the accomplishments of women all over the world. In Minnesota, women leaders are shaping history every day in the National Guard.

“I wanted to serve to challenge myself,” said Sgt. 1st Class Lina Knox. “Over time it became about the mission, but now it’s about serving the Soldiers. The reason why I serve is for leadership and mentorship, to help people grow, for them to take my spot.”

Outside of the military, Knox currently works as the Employment Opportunity Manager for Minneapolis VA Health Care System. She has worked with the VA for 13 years, recently taking on the new position one year ago.

As a platoon sergeant with Headquarters and Support Company, 834th Aviation Support Battalion, Knox assists battalion staff in the support operations section in determining what is needed for fuel projections. The unit supports both aviation and ground companies.

“When we have a project, I like to look at how we can execute [it],” said Knox. “And what kind of support is needed. I love that aspect. You are an overall supervisor not just supervising individual Soldiers.”

For Knox, Women’s History Month is about showing that women are here, and they are not going anywhere.

“The change is always small, but it’s really about awareness,” said Knox. “If we are able to change on a company level but also on a personal one and if we can develop Soldiers, especially women, to be leaders, our military will be better.”

Knox first enlisted in February 2007 as a petroleum supply specialist and has served in the Minnesota National Guard for more than 15 years. She has deployed three times, once in 2008 and again in 2009 . She returned from her most recent deployment in 2020.

Throughout her career, Knox’s most impactful memory was teaching the Basic Leader Course (BLC) to junior service members.

“On this recent deployment during the height of COVID-19 they closed the BLC classes overseas,” said Knox. “So, the units had to provide instructors for Soldiers in their battalion or brigade.”

At the time, she was ready to get out of the military, but teaching those six classes changed her mind.

“It was one of those things, like, ‘hey, we chose you because we know you’re a good leader,’” said Knox. “There are aspects that will help Soldiers.”

The opportunity to grow future leaders for the Minnesota National Guard allowed her to reformulate the type of leader she wanted to be.

“Supporting the battalion and getting Soldiers through [BLC] was important,” said Knox. “They’re going to become team leaders; I just gave them the foundation of what they need to be successful.”

Knox believes leadership and mentorship have the biggest impact service members. Throughout her career, both male and female leaders have mentored her and encouraged her to become a better version of herself.

“This is bigger than the National Guard,” she says. “We have to continue to build these Soldiers because we aren’t always going to be around. It’s about those younger, junior enlisted Soldiers that we want to show, these are the things that can be impactful for not only yourself but the military as a whole.”

Before she hangs up her boots, Knox hopes to have earned a diamond and serve as a first sergeant.

“I want to show other women that it is achievable to make it,” said Knox. “You can move beyond the rank of sergeant or staff sergeant. Be the game changer.”