Women on Guard: Minnesota artist honors women in the military 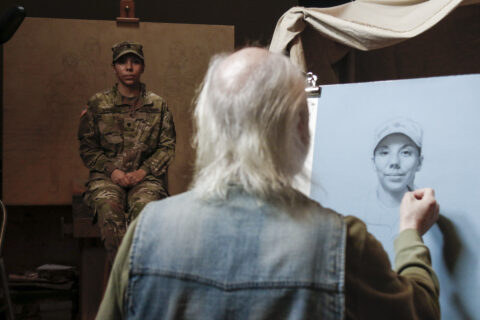 Titled “Women on Guard” the painting weaves together the stories of five women of Hispanic, African, Iranian, European and Native American decent who will be depicted in their duty uniform, dress uniform, or civilian work uniform. Additionally, the composition will include vignettes of their hobbies and culture.
This project came about as a result of a project Kapsner completed in 2019, a series of five 8-by-10-foot oil paintings which now hangs in the Minnesota State Veterans Cemetery’s committal hall north of Little Falls. The monument took nearly 10 years to complete and includes an oil painting dedicated to five military branches: the Army, Navy, Marine Corps, Coast Guard and Air Force.

“The perfect follow up to the five big paintings at the cemetery would be to talk about the cultural and ethnic diversity of women in the Minnesota National Guard,” said Kapsner.

The central Minnesota artist came up with the idea to honor military women in the summer of 2021. He hopes the project will be completed before the end of 2022.

“The painting is about the five of them,” said Kapsner. “I am the painter, but it’s their stories that I am depicting.”

For Kapsner, this four-by-five-foot oil painting will also honor the influential women in his life such as his mother Florence, his Italian language instructor Nerina Simi and Laura Jane Musser, a longtime family friend.

“It pays homage to these fine women who were major influencers in my life,” said Kapsner. “And now the five ladies in the painting are the influencers.”

Throughout the piece, Kapsner plans to include various elements of symbolism to show how the world and military are changing. For example, the background will include a rising sun, symbolizing that the sun is rising on women in their careers.

“Once I got rolling on it, the imagery was pretty much set in my mind,” said Kapsner. “You have to let the project grow. The idea starts to take over like that.”

Below the sun will be an open field signifying how career fields in the military are becoming more inclusive towards women. And finally, the foreground will feature a chess board.

“Life is a strategy,” said Kapsner. “How are you planning? What will you give back to make a difference, whether it be your family, the community, the state, or the nation?”

Throughout the process, Kapsner has leaned on family, friends, and Minnesota National Guard leaders for support. His wife even helped write two grant applications to offset the costs of the project. Both were funded: one from the Five Wings Arts Council and one from the Minnesota State Arts Board.

“Catherine is a brilliant grant writer,” said Kapsner. “When it comes to grant writing, she asks me all these questions. And because we’ve been together for almost 25 years, there’s so many parts and elements of what I do, think, and say that she is able to fabricate it in a very wonderful fashion.”

To satisfy the terms of the grant, the painting will be shown in four locations around the state before being displayed at its final destination as part of the Minnesota Military Museum’s permanent collection near Little Falls.

“Art is invaluable for expressing ideas,” said Kapsner. “Educating people from a historical standpoint would be how you look at the five pieces in the cemetery. This one here is on a personal level. It’s about what’s going on right now.”

Charles Kapsner is a fiscal year 2022 recipient of a Creative Support for Individuals grant from the Minnesota State Arts Board. This activity is made possible by the voters of Minnesota through a grant from the Minnesota State Arts Board thanks to a legislative appropriation from the arts and cultural heritage fund. This activity is also made possible, in part, by the Five Wings Arts Council Individual Artist Grant Award with funding from the McKnight Foundation.