Year in Review Part 3 of 3: Partnerships enable Guard support to the community 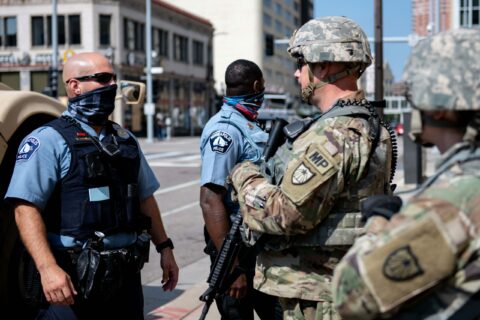 December 22, 2020 (ST. PAUL, Minnesota) – Partnerships with other local, state and federal agencies enabled the Minnesota National Guard to serve the state through multiple activations throughout 2020, to include responses to flooding in northern Minnesota in April, civil unrest at the end of May and beginning of June, and an ongoing response to COVID-19.

In April, about 20 Soldiers with the 2nd Combined Arms Battalion, 136th Infantry “Bearcats” based out of Moorhead, Minnesota, worked with the city of Oslo and Marshall County to assist the community with monitoring levees and flood protections systems. The Soldiers were also able to support any potential rescue and evacuation operations.

At the end of May into the beginning of June, the entire Minnesota National Guard was activated in response to civil unrest in the Twin Cities with about 7,000 Soldiers and Airmen on duty. The Guard assisted law enforcement officers from the Minnesota State Patrol, Minnesota Department of Natural Resources, and several local police departments in protecting people, property, and maintaining peace. By partnering with local law enforcement agencies, the Guard frees officers for other critical law enforcement missions.

These partnerships are not made overnight. They are formed through combined training exercises.

“Strengthening these relationships is important in the long term, especially in today’s environment,” said Lt. Col. Troy Fink, commander of the 1st Battalion, 151st Field Artillery. “We have done training with these other agencies, probably more in practical, real-world scenarios, such as the [civil unrest] state active duty mission.”

At the end of March, the Minnesota National Guard assisted the U.S. Army Corps of Engineers, Minnesota Department of Health, and other agencies in identifying alternative care sites in communicates across Minnesota in the event additional medical facilities were needed.

“It’s always a pleasure to serve the citizens of the state of Minnesota, primarily in those long-term care facilities where a lot of these senior citizens haven’t had the chance to see their families since April when COVID started,” said Col. Scott Rohweder, the Director of Operations for the Minnesota National Guard. “It’s a huge honor to be able to support them and provide that aid that they need.”

The Minnesota National Guard is a part of the community. When the Guard partners with various agencies, it helps to ensure the safety and security of Minnesota communities.

“It’s a time for us to reflect as an organization on the past and a time to look toward the future,” said Minnesota Governor Tim Walz. “There are few institutions that have the credibility and the trust of the American people as the National Guard; and that comes from the quality of the people who are there and it comes from the leadership.”