Your Left, Your Write: A Soldier Author 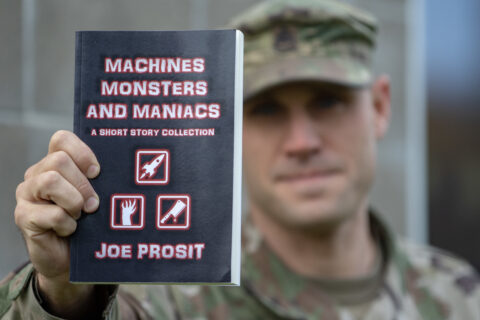 October 29, 2021 (Camp Ripley, Minnesota) — We all have a book or two that we can’t put down or can’t stop thinking about. On the first of November, readers and authors around the world celebrate a special day, National Author’s Day.

This holiday gives people a chance to appreciate the minds that create these addicting books.

For one Minnesota National Guard soldier, this day is more than thinking about his favorite authors.

“November is also National Write a Novel in a Month,” said Sgt. 1st Class Nathanael Porisch, Camp Ripley’s Range Facility Management Support System (RFMSS) Scheduler and local author. “It’s hard enough to write a novel without the added challenge of trying to do it all in one month. But if it gets people writing, more power to them!”

Porisch began his military career as a Combat Engineer with the 11th Armored Cavalry Regiment based out of Fort Irwin, California in 1997. After three years of active duty, he decided to join the Minnesota National Guard.

“My favorite thing about serving with the guard is having an impact beyond my family, my community and my home,” said Porisch. “The excitement, unpredictability and working with other soldiers has shaped my entire life.”

When Porisch was about four years old, he began watching the hit TV series ‘G.I. Joe: A Real American Hero’. The series sparked an interest in the military and writing. As a kid, he says he began writing before he could write.

“I would draw pictures and my mom would write down what I told her,” said Porisch. “That’s how I started, and I’ve never really stopped.”

Porisch comes from a long line of service members. His dad served in Vietnam, his grandpa, in Korea and his great grandfather served in World War One. Beyond that, his ancestry can be traced to Ethan Allen, who led the Green Mountain Boys to capture Fort Ticonderoga during the Revolutionary War.

Service is an important value for him.

“We derive our strength from all the people who’ve come before us,” said Porisch. “When I was in the 194th Armor Regiment, we would look back on the Bastards of Bataan to pull from their hardships.”

Serving in the military has impacted his writing in various ways. Porisch explained that half of what you write comes from the things you like but the other half is what you experience, your hardships, struggles, victories and beliefs.

“Everything that I’ve experienced feeds those fictional worlds,” said Porisch. “I have a wealth of life experiences that probably most writers don’t have that I use to feed the fire.”

Outside of the military, Porisch is a father of three. He has written stories with his oldest two, Nick and Cadence and hopes to share his passion with his youngest, Lydia, someday.

Juggling family and military life is not always an easy task. When Porisch deployed to Kosovo and Iraq, his children had to be without their dad.

“They sacrifice a lot because their dad’s in the Army,” said Porisch. “Civil unrest kicks up and I’m gone for 10 days at the drop of the hat, but I think we’ve all grown and became stronger because of those things.”

Porisch, who was recently elected as President of the Brainerd Lakes Area Writer’s Alliance, spoke over the weekend at a conference at Northland Arboretum.

“We are all intimidated by the blank page, the uncarved block, the infinite possibilities of a canvas unmarred by the brush in our shaky hands,” said Porisch.

Porisch’s works are published under the pen name Joe Prosit. He has published roughly 20 short stories, 16 of which are compiled into a book title Machines Monsters and Maniac and is currently working on a few novels. He also has written a few flash fiction stories and audio dramas.

His favorite story he’s written is titled ‘The Hum’. It’s about a kid who hears the worldwide hum who is tracking down a demon with his dog Barkley. The story was first published on December 10th, 2017 on NoSleep Podcast, Season 10, Episode 5.

“A lot of times people don’t know they’ve triggered something in my brain that will get me writing,” said Porisch. “It’s fun how many ordinary things can become interesting by looking at it slightly askew.”

For other people who want to publish a book, Porisch’s number one piece of advice is to just write.