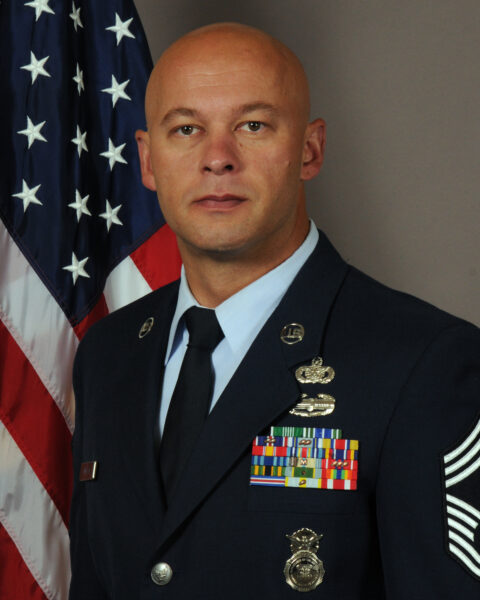 FOR IMMEDIATE RELEASE: Oct. 13, 2021 (DULUTH, Minnesota) — Chief Master Sgt. Jozef Miketin was selected as Command Chief of the 148th Fighter Wing, Minnesota Air National Guard.  As the Command Chief, Miketin will serve as the senior enlisted advisor to the wing commander and as the wing-level representative for all enlisted members.

“Chief Miketin has proven success in his roles supporting Federal and State missions since joining the Minnesota National Guard in 1998.  His education and military experience combined with his duties with the Duluth Police Department and Fond Du Lac Tribal and Community College make him a natural choice to lead and represent the 900+ enlisted members of the 148th Fighter Wing,” said Col. Chris Blomquist, 148th Fighter Wing Commander.

A native of Esko, Minnesota, Miketin enlisted in the Minnesota Army National Guard in 1998 as a wheeled vehicle mechanic.  He attended Army Basic Military Training at Fort Leonard Wood, Missouri and Wheeled Vehicle Mechanic training at Fort Jackson, South Carolina.  While attending college for a civilian law enforcement degree, Miketin transferred to the 79th Military Police Company, Army Reserve and attended Military Police technical training at Fort Riley, Kansas.  In 2003, Miketin was deployed to Iraq with the 79th Military Police Company where he served as a fire team leader. As a result of his efforts in Iraq, Miketin was awarded combat patch, Combat Action Badge and Army Commendation Medal.  In 2006, Miketin enlisted at the 148th Fighter Wing as a security forces specialist.  In this capacity, Miketin has served as a fire team leader, squad leader, flight chief, training manager, operations superintendent, security forces manager and chief enlisted manager.  Most recently, Miketin served as the senior enlisted leader of 100 Airmen during the 2021 Presidential Inauguration in Washington D.C. and an April state active duty mission, Operation Safety Net, designed to protect the public during the trial of Derek Chauvin in Brooklyn Center and St. Paul, Minnesota.

Currently Miketin is employed with the Duluth Police Department as a Sergeant in the Patrol Division.  In this capacity, he also serves a team leader on the Tactical Response Team.  Additionally, Miketin works at Fond Du Lac Tribal and Community College as a faculty member and business program coordinator.

Miketin will officially assume the role of Command Chief during a Change of Responsibility ceremony on October 15, 2021.  Local media are invited to the 148th Fighter Wing, by appointment, on Friday, October 15, 2021 between the hours of 9:30am and 12:00pm.  Due to COVID-19 safety mitigation practices, we will not invite media to the afternoon change of responsibility ceremony but will provide photos and b-roll from this event upon request.  RSVPs should be coordinated with Audra Flanagan, 218 788-7365, no later than Thursday, October 14, 2021 at 2:00pm.  The 148th Fighter Wing is a secure military installation.  Media members must be vetted prior to arrival.