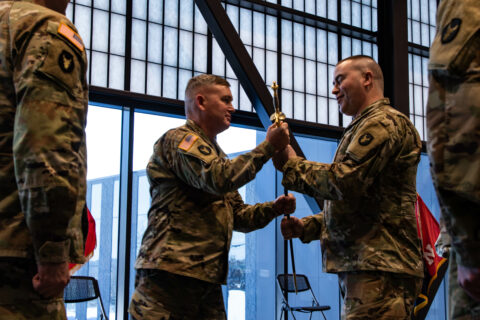 Command Sgt. Maj. Matthew Erickson was recognized as the 34th Red Bull Infantry Division’s new senior enlisted leader at a change of responsibility ceremony held in Arden Hills on January 8, 2023. He was preceded by Command Sgt. Maj. Stephen Whitehead, who now serves as the Senior Enlisted Advisor – Army for the Minnesota National Guard.

“It really is an honor and a privilege to assume this position in such a great organization; an organization that has a national reputation for excellence,” said Erickson. “While the commanders play a huge role in creating the expectation of excellence and points the Division in the right direction, the actual performance of the organization– of it’s officers, noncommissioned officers, and Soldiers—is what really sets us apart.”

Command Sgt. Maj. Erickson has been serving in the Minnesota National Guard for nearly 29 years. He enlisted as a cannon crewmember in 1992 and has served as a section chief, platoon sergeant, operations sergeant, and first sergeant. He has also served as command sergeant major for the 682nd Engineer Battalion, the Training Support Unit, the 1st Armored Brigade Combat Team, and most recently for the 34th Division Artillery.

Outgoing Command Sgt. Maj. Whitehead began his career in 1991, also enlisting as a cannon crewmember. He would go on to serve as command sergeant major for 1st Battalion, 125th Field Artillery and 84th Troop Command before achieving the role at the 34th Infantry Division.

“In my 31 years as a member of the Minnesota National Guard, all of it has been spent as a Red Bull until my recent move. There is something unique about this organization and the opportunities it provides that compels us to continue our service,” said Whitehead.

In assuming his new role, Command Sgt. Maj. Erickson will act as the most senior enlisted member of the 34th Infantry Division, charged with the development and care of its Soldiers.

Said his partner in the command team, Maj. Gen. Charles Kemper, “Command Sergeant Major Erickson is a leader entrusted to leverage his nearly 29 years of experience to shape and guide the [noncommissioned officer] corps and Soldiers of the 34th Infantry Division.”