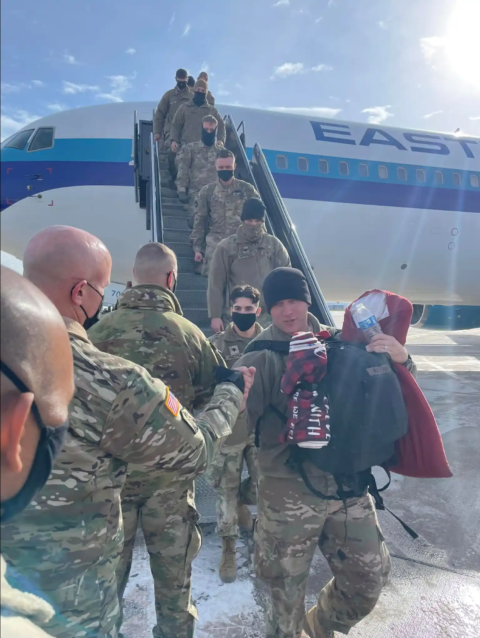 “Our Soldiers had a successful and historic deployment executing missions at 12 locations in nine different countries,” said Army Lt. Col. Jake Helgestad, Task Force 1-194 Commander. “The Soldiers participated in the largest U.S. ground exercise with the Egyptian military, the first-ever trilateral exercise between the Kingdom of Saudi Arabia, Kuwait Land Forces, and U.S. forces, conducted operations in Syria, guarded key regional U.S. infrastructure, and participated in the withdrawal of Afghanistan.”

While deployed, the Task Force was responsible for the Operation Spartan Shield Response force mission throughout the Middle East to include responding to any emergencies and providing support to units while conducting training exercises with our Allies in the Middle East.

The unit deployed in March 2021, and during their deployment, supported Operations Freedoms Sentinel and Spartan Shield. TF 1-194 were essential in supporting our Allies and the citizens of Afghanistan at Hamad Karzai International in Kabul, Afghanistan, working alongside the Air Force and Marines, ensuring a safe and successful evacuation of vulnerable Afghan citizens and Allied personnel.

“We had Soldiers on the ground in Kabul securing the airport while we simultaneously provided medical screening, and camp support, to over 5,000 Afghan civilians in Kuwait,” said Helgestad. “The success of the Task Force is a direct reflection of the professionalism of all its Soldiers. It only adds to the history of the 1-194 regiment and 1st Armored Brigade Combat Team.”

“TF 1-194 completed this long deployment thanks to the families who have provided immeasurable support.” Helgestad added, “I want to express my sincere appreciation and respect to all the families of the Task Force. The unwavering support over the last 11 months allowed your Soldiers to expertly execute their mission.”