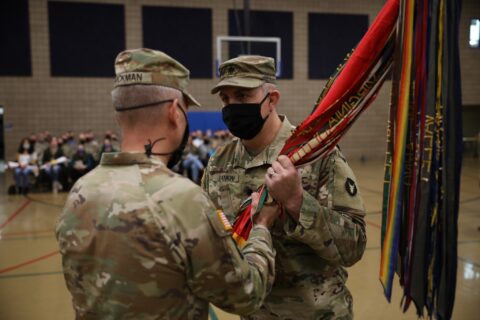 “I enlisted as a private nearly 28 years ago and have had the honor of serving our great State multiple times on state active duty and our Nation on three combat deployments. It’s a tremendous honor that I get to continue to serve as the commander of the finest brigade in our Army,” said Rankin. “I look forward continuing to develop the Soldiers of the organization, collaborate with our community partners, and sustain the legacy of the brigade.”

Rankin was commissioned as an infantry officer in the Minnesota Army National Guard in 1998. He deployed to Iraq in 2006-2007, Afghanistan in 2011-2012, and the Horn of Africa in 2020-2021. In his civilian career, he is the Superintendent of Minnewaska Area Schools.

After successfully completing his tour as commander from 2018-2021, outgoing commander Col. Timothy Kemp has assumed duties as the Chief of Staff for the 34th Red Bull Infantry Division.

“I feel blessed and honored to have led this brigade. It’s been the capstone of my career thus far,” said Kemp. “I am extremely proud of the hard work and dedication of these Red Bull Soldiers and am grateful for their service while I had the honor of being their commander.”