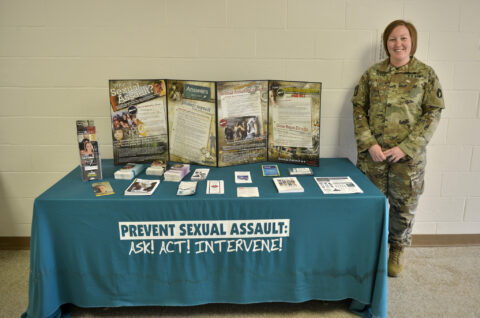 COTTAGE GROVE, Minn. (April 26, 2017) – Staff Sgt. Nicquie Neely has been working with victims of sexual assault for four years in the Minnesota National Guard and also volunteers as a victim advocate in the community. As a victim advocate, it’s her job to believe and support victims through a difficult process that can often involve extensive medical care and legal proceedings.

“Ever since I joined the Guard and heard about the SHARP program and learned what a victim advocate was, I always wanted to be one,” said Neely. “And then I learned that you had to be an E-6 to be in that position, so the minute I got promoted I asked my commander if I could go to the training.”

“Just when I think I’ve got a real handle on what this job is and what it means, I learn something else,” said Neely. “I learn something new every time, and it’s always changing, it’s always updating we’re always learning new things about how to better care for victims and how to care for secondary victims.”

Victim advocates in the National Guard play an important role in the Sexual Harassment and Assault Response and Prevention (SHARP) program. They are one of just three people (Sexual Assault Response Coordinator, Victim Advocate or Chaplain) who can take a restricted report and they are assigned to victims to ensure that they have somebody there to help them through the entire process. Their primary job is to listen and not judge and focus solely on helping the victim.

“Our job as victim advocates is to believe everything that the victim says – we are not judge or jury – and that’s a really important healing aspect for the victim,” said Neely. “If they go through a process where they go see medical personnel or they go see the police, they need someone on their side who believes everything they say and can stick up for them when someone says something that’s not ok.”

Neely says that since she’s joined the National Guard, the environment and attitude about sexual assault and harassment has gotten better and continues to improve. She credits more informal training opportunities with making it easier for Soldiers to ask questions and discuss sexual assault.

“I think it’s just become more of an open topic and people are becoming more comfortable talking about it, in turn making it easier for victims to come forward and report, or at least reach out and talk to somebody about it if something does happen,” said Neely.

Being a victim advocate can be an emotionally-taxing experience. Advocates see people at their worst and need to be able to earn the trust of a person who’s in a vulnerable place and provide whatever comfort and assistance they need.

“I think the most difficult thing is listening to their story and not trying to rush in and fix everything for them right away,” said Neely. “It’s understanding that they have a healing process to go through and knowing that you just play one very small portion but it can be a very significant portion that contributes to the rest of their healthy healing.”

Neely has decided to pursue a career after the military using some of the skills she’s gained as a victim advocate. She will graduate May 1 with a bachelor’s degree in individualized studies focused on communication, advocacy and violence prevention. While Neely has some time before her military retirement, she’s already looking toward a future career which will allow her to work to improve the laws and policies that exist around sexual assault.

“Knowing that somebody went through something which I believe to be one of the most awful things that you could ever go through as a human being, and being a part of that healing process and being hopefully a positive presence, it feels good,” said Neely. “I just continue to be awed and inspired by their courage and bravery and I can’t really say I get a lot out of it, I just like being there for them in that moment.”