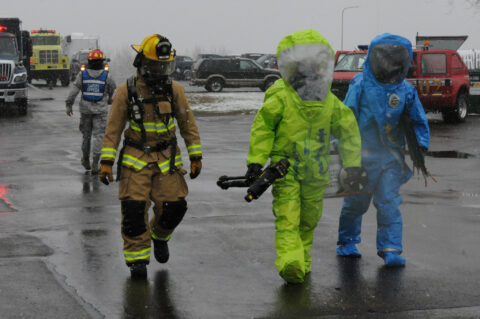 The results were impressive.

From Thursday, Aug. 3rd to Monday, Aug. 7th, during the course of the 148FW’s August Drill Weekend, nearly 50 inspectors flew up to northern Minnesota to take a closer look at the 148FW during a Unit Effectiveness Inspection (UEI).

Their white IG badges conspicuously dangling around their necks, the inspectors spoke at length with the 148FW Airmen, asking them about their training plans, and their file plans, their checklists and their ability to accomplish their given mission. Documents were reviewed, reports were validated and equipment was inventoried. The inspection was as thorough as it was exhaustive.

Prior to the inspection team’s arrival, Col. Jon S. Safstrom, 148FW Commander, sent a message to the approximately 1,000 Airmen under his command. Safstrom’s guidance to the Airmen was simple yet inspiring. In a base-wide email and also in staff meetings, his words motivated and gave assurance. “The only ‘prep’ you should do for this inspection is the same thing you would do for any other visitors to our great wing – make sure your shop is clean, organized and safe,” he wrote in a base-wide email.

“It’s business as usual this weekend,” he told a meeting of his senior leaders the week prior to the inspection.

This particular UEI was known as a “Capstone” inspection, meaning it was an in-person inspection by the ACC inspectors. For Air National Guard units, capstone inspections take place once every four years versus every two years for Active Duty units.

In the last four years, Safstrom’s CCIP has taken a magnifying glass to the unit’s processes and methods to identify areas of need, areas in need improvement and resources, and areas of exceptional performance. It’s the CCIP’s mission to detect areas of non-compliance at the 148FW.

After that, it’s the ACC inspectors’ mission to validate Safstrom’s CCIP, to make sure the CCIP hasn’t overlooked anything. “The ACC inspector team is looking for undetected non-compliance, if we haven’t detected it, then there’s a problem,” said Lt. Col. Thomas Ruud, 148FW Inspector General.

By the end of the weekend the meetings had been held, the checklists had been checked and the results were in. The 148FW had themselves a very good weekend. The praise was abundant and the gratitude was plentiful.

“A model program,” “excellent,” “one of the best,” “another first,” were just a few of the accolades the inspection team used to describe the 148FW.

In Major Graded Areas Three and Four (MGAs) the 148FW was rated as “HIGHLY EFFECTIVE.”

In numerous sub-MGAs the 148FW was rated as “HIGHLY EFFECTIVE.”

The 148FW was singled out for “exceptional performance” in each MGA. The inspection report spotlighted a 2016 OSHA Inspection “Star” rating, a demanding certification. The “Star” rating recognizes an organization’s dedication to worker protection and a continuous pattern of improvement.

The inspection leadership team commented, “I haven’t seen a wing receive such high marks… it’s apparent they are doing a lot of things right.”

“I shouldn’t be surprised by this, and I’m not,” Ruud said. “We’re a strong organization.”

Referring to past inspection successes, Ruud made a connection to the 148FW’s motto. “You’ve seen the ‘Legacy of excellence’ up on walls? That’s where that came from,” said Ruud.

“It’s more than just a motto, it’s who we are,” Safstrom said.

In a follow up email to his Airmen at the close of the inspection, Safstrom thanked them for their effort and congratulated them on their success. “Your professionalism, attention to detail and full embrace of the inspection system has helped make us one of the best units in the Air National Guard!”

“Thank you for all you have done, and continue to do, for our state and our nation.”