Learning to instruct professionalism and discipline

Soldiers of National Guard units from all over the United States took part in the course designed to educate team leaders in a variety of funeral honor detail tasks, traditions and responsibilities.

“It’s a stressful course, but for our job, we have to be prepared to do our job under stress; and we all really benefited from that,” said Class Honor Grad, Sgt. Ryan Valline of the 2nd Combined Arms Battalion, 136th Infantry.

In 2000, Congress passed the National Defense Authorization Act requiring the Department of Defense to provide military funeral honors for eligible veterans upon request. As a result, National Guard units of six states put into action a cooperative program to honor veterans of all military service components.

Minnesota joined this initiative in 2005 for the purpose of rendering Military Funeral Honors as a way to faithfully recognize the gratitude for the men and women who defended our country in times of peace and war.

At Camp Ripley, the Minnesota Funeral Honor Teams hosted the Level 2 Instructor Certification Course which develops and qualifies young leaders in order to instill the programs disciplines back in their own units.

“We work hard to get all the units on the same operating procedure,” said Valline. “It’s a guarantee for us; for everyone to be operating the same should we have to pull in someone from another state.”

“There is a lot to learn from courses that teach you how to trust and work with other,” said Spc. Jennifer Lord, 1034th Quartermaster Company, Iowa National Guard. “It’s important to learn to help each other so as a whole everyone can improve.”

Each day of the course began at 5 a.m. to include physical training, which motivated the class and reinforced the standards of healthy living, as well as professional military appearance. Following the morning routine, the class conducted one of several drills geared to test their abilities as well as their leadership skills.

“My intent is to be the best that I can for my soldiers back home and be there to answer their questions,” added Lord.

The class practices as a team through several drills including firing party, three-round volley and folding detail, each with a variation of team members. Appearance boards are also held as an exam as well as the proper method of conducting and instructing a full military funeral honors sequence.

A graduation ceremony was held Apr. 14 for the 12 students who successfully completed the course, and earned the right to proudly wear the honor guard tab. This tab, presented by Lt. Col. Scott Rohweder, G1 Army Personnel Division Chief for the Minnesota National Guard, is a symbol of their hard work and dedication to the program and qualifies them to participate in military funeral honors events.

For more information about the military funeral honors program or to initiate a request for Military Funeral Honors for a deceased veteran, contact your local funeral home director or visit www.minnesotanationalguard.org/honorguard/. You will need to provide proof of military service in the form of a DD-214 or Statement of Service. 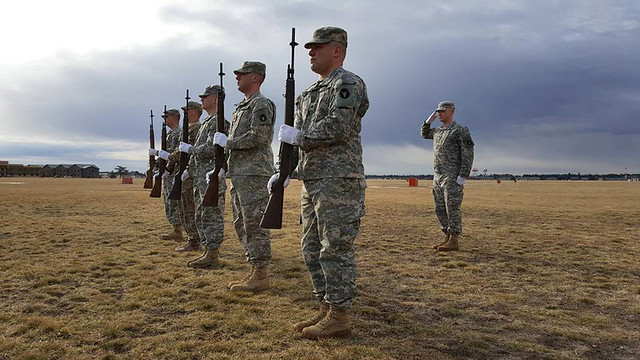