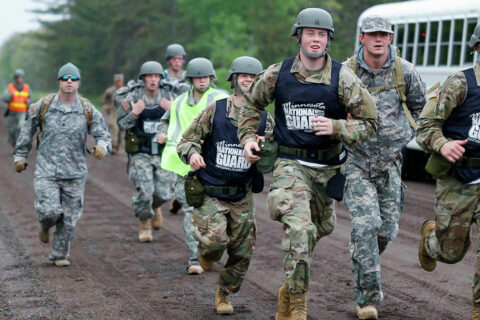 CAMP RIPLEY, Minn. (May 24, 2017) – More than 900 recruits from the Minnesota National Guard came to Camp Ripley Friday through Sunday for Operation Future Warrior.

Young men and women who volunteered to join the Minnesota Army National Guard got to experience a small taste of basic training and military training during the three-day event.

Beginning on Friday, recruits from all over Minnesota disembarked from the military-style buses to make introductions with their drill sergeants, team leaders and instructors as part of what is called HIRT–or High Intensity Resilience Training. This training included events on the Confidence Course & the Leader’s Reaction Course in addition to a 30 minute “shark attack” simulating the intense first interactions recruits will make with drill sergeants at basic training.

“The main drive behind HIRT is to prepare these young warriors for what to expect at basic training. It’s so they can have a feel for the stressors and it will not be as much of a shock once they arrive at their training site,” said Sgt. 1st Class Amanda Hunt of the St. Cloud Recruiting Team.

With over 900 recruits from the eight Recruit Sustainment Program areas around the state, Camp Ripley’s training area became a very busy place. Events like Warrior Challenge tested each team of eight individuals through a physical fitness test, 5.3 mile ruck march, land navigation, and marksmanship on the EST2000 simulator.

“They were motivated and eager,” said Master Sgt. Duwayne Schmitz, first sergeant for the Camp Ripley RSP. “Everyone was pumped up, even with the poor weather, and showed a high level of proficiency.”

Since the RSP program’s inception in the mid-1990s the ideal result has been to create a career orientation opportunity for all recruits and their families to better understand the next steps before, during and after basic training. Operation Future Warrior is the next generation of that same intent and promotes a motivating Army environment generating awareness and education to prepare Minnesota National Guard soldiers to get the most out of their careers.

By the second day, recruits were taking part in Soldier Training Readiness Modules and classes in basic Army tactics. As planned for the third day of the event, recruits were taken through the process of several administrative exercises and an awards ceremony. The usual pass and review event was cancelled due to the poor weather, but the exhausted recruits seemed to be proud of the accomplishments they earned, the great time they had, and the cool stories to tell back home. 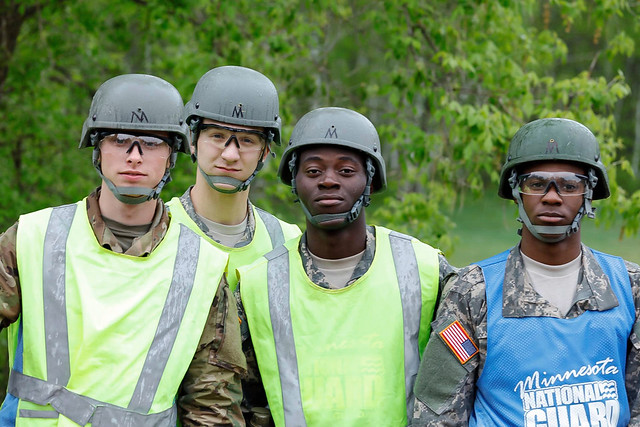