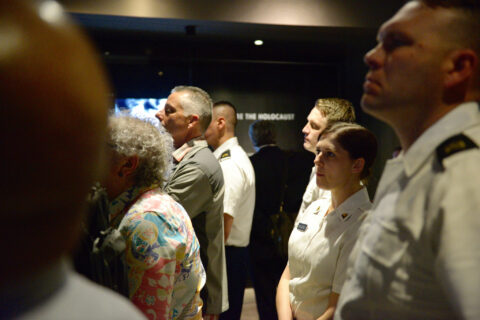 Washington (April 24, 2017) – Members of the Minnesota National Guard and the Air Force Reserve traveled to Washington D.C. with the Jewish Community Relations Council of Minnesota and the Dakotas (also known as the JCRC), to visit the Holocaust Museum, April 4, 2017, to honor the victims of the Holocaust. Also, traveling with this group were St. Paul and Minneapolis police officers along with students from various high schools around the state. For those in uniform that day, it was an opportunity to see, hear and experience the stories of victims and survivors of the Holocaust.

Each Service member who attended was asked to bring back a summary of their experience in the form of a presentation, professional discussion or briefing to their respective unit in order to help other Guard members better understand and remember that horrible event, to honor the courage of the victims and survivors, and to remain vigilant as members of the U.S. military.

“The honor and privilege of accompanying members of the Minnesota National Guard to the Holocaust Memorial Museum in Washington, D.C. met so many goals,” said Steve Hunegs, the executive director of the JCRC. “I wanted to reinforce the importance of the commitment of the U.S. military to democracy. After all, it was the Allies that defeated Nazi Germany and ultimately put an end to the Holocaust.”

The U.S. National Holocaust Museum focuses not just on the Holocaust event itself but it also tells the story and recreates the experience of the slow, methodical and systematic process that ultimately led to the concentration camps. The efforts to dehumanize fellow citizens, institute laws that reduced rights and destroyed their livelihoods was not a sudden event. It was a build up to something more ominous.

Spc. Nikita Wilmers of the Minnesota National Guard’s 134th Brigade Support Battalion, went in to the trip with a basic understanding of the Holocaust, but was surprised at the information she learned at the museum.

“I thought it was great to learn about the events leading up to the mass killings and what happened and how these little things that people overlooked or didn’t do anything about, can turn into something massive,” said Wilmers. “It really goes to show you really have to stand up for what’s right and moral no matter what. Fear isn’t an excuse for what happened and you need do what is right at all times.”

“This could have been stopped if somebody would have done that; if some people would have bonded together,” Wilmers added. “But it wasn’t, and people overlooked it, or they just said ‘It’s not happening to me. It’s fine. It’s happening to somebody else’, but what happens when it does happen to you? It shouldn’t matter who its happening to. You should always do what is right.”

“The whole goal of the diversity and inclusion office is to broaden the minds and thoughts and experiences of all our Guardsmen,” said Lt. Col. Jeffery Merricks, Commander of the 834th Aviation Support Battalion and the Director of the Minnesota National Guard’s Diversity and Inclusion team who led the military contingent.

“We are very proud of our relationship with the Guard; it’s wonderful that we had this first opportunity to travel with the Guard and with this diverse group of 160 people, said Hunegs. “I would hope [this partnership] would continue from year to year. It would be fantastic.” 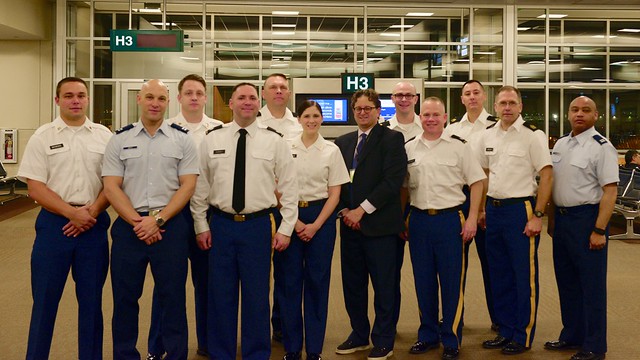