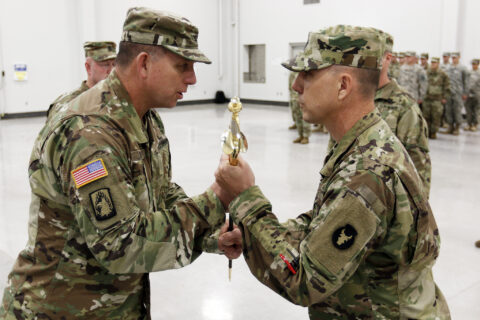 Command Sgt. Maj. Mitchell Hellkamp assumed duties as the unit’s senior noncommissioned officer (NCO) from Command Sgt. Maj. Stephen Cunnien, who served in the position for the past two years and will be retiring from the military later this year.

“Command Sgt. Maj. Cunnien is one of the finest leaders that I have worked with in my career,”said Col. Shawn Manke, commander of the 34th CAB. “He sets the example for all noncommissioned officers and Soldiers to emulate. He is a true professional, as a visible leader and teacher for the Soldiers of the combat aviation brigade. We’re grateful for his many years of service, and we wish him well as he closes out his military career and enters the next chapter in his life.”

Cunnien has 31 years of military service. He began his career with four years of active duty int he U.S. Army, serving as an attack helicopter repairman for the 6th Calvary Brigade out of Fort Hood, Texas. In 1990, Cunnien joined the Minnesota National Guard, where he has served in a variety of positions, including as the operations chief for the 34th CAB, senior logistics sergeant major for the 347th Regional Support Group, J33 operations chief for Joint Force Headquarters (JFHQ), and as a battalion operations NCO for both the 2nd Battalion, 147th Assault Helicopter and the 834th Aviation Support Battalion. Currently, Cunnien works full-time as the state operations NCO for St. Paul-based JFHQ.

“I’d like to be the first to welcome Command Sgt. Maj. Hellkamp to the top enlisted position in the 34th Combat Aviation Brigade,” Manke said. “He has tremendous experience leading Soldiers and will be a great mentor and leader among our Soldiers. We’re extremely happy that’s now part of the combat aviation brigade team.”

In his new assignment as the senior enlisted leader for the 34th CAB, Hellkamp will report to and advise Manke on Soldier-related issues, challenges and opportunities. As the brigade’s highest-ranking enlisted Soldier, Hellkamp is responsible for the health, welfare, morale, training and professional development of the unit’s Soldiers.

“I’m excited to be joining the CAB team,” Hellkamp said. “After spending many years with Soldiers on the ground, I hope to provide a unique perspective to our aviators and those who support them. In time, I expect to absorb some of the knowledge and understanding that only a group of experienced pilots and aviation Soldiers can provide. I look forward to working with Col. Manke and advising him on Soldier-related issues. The health, welfare, and success of the CAB’s Soldiers will now be my top priorities.”

The time-honored change of responsibility ceremony was held in front of an audience of 34th CAB Soldiers, families and guests of the two command sergeants major. 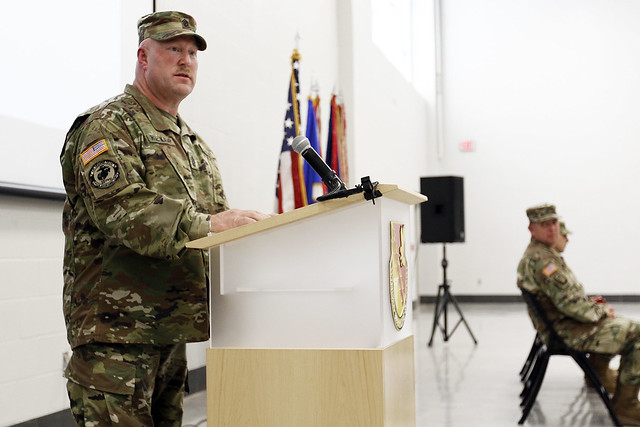